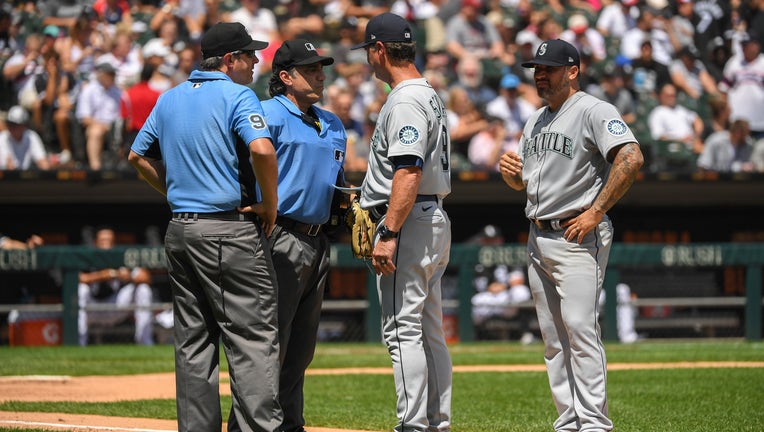 CHICAGO, ILLINOIS - JUNE 27: Umpires Phil Cuzzi #10 and Brian Gorman #9 talk to manager Scott Servais #9 before ejecting Hector Santiago #57 of the Seattle Mariners from the game after finding a substance on his glove in the fifth inning against the

CHICAGO - Seattle Mariners pitcher Hector Santiago became the first player to be ejected as part of Major League Baseball’s new foreign substance protocols when he was thrown out of Sunday’s game against the Chicago White Sox.

Santiago was checked by the umpires as he exited in the fifth inning. His glove was confiscated, and it was later announced that Santiago had been ejected.

Santiago was charged with one run and three hits in 2 1/3 innings in the resumption of Saturday’s game, which was postponed by rain.

Major league umpires last week started regular checks of all pitchers for sticky substances used to get a better grip on the balls, but can also increase the spin of the balls and make hitting them more difficult.

Santiago could be suspended for 10 games, but there is an appeals process.