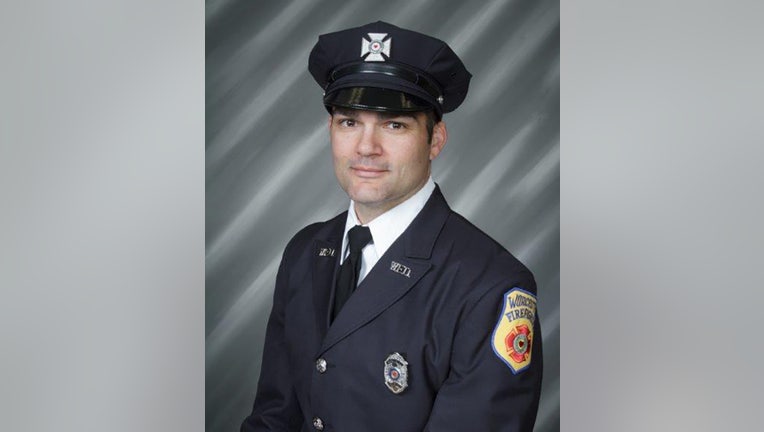 WORCESTER, Mass. - A Massachusetts fire lieutenant scheduled to leave on a Disney vacation with his family after his shift ended died early Wednesday while investigating a report of a trapped baby in a burning home, his chief said.

Lt. Jason Menard, 39, and his crew became trapped on the top floor of the three-story home after the fire was reported at about 1 a.m., Worcester Fire Chief Michael Lavoie told a news conference.

Menard helped two members of his crew escape but he himself was unable to get out.

Menard “heroically and selflessly saved his crew, helping a probationary firefighter to the stairs and then returning to rescue another trapped firefighter, assisting him out the window,” Lavoie said.

One resident of the home was taken to the hospital with serious injuries. No other civilian injuries were reported. About 15 residents were displaced, according to the Red Cross. Officials could not immediately say whether a baby was among the displaced.

The cause of the blaze, which took place with outside temperatures hovering in the teens, remains under investigation.

Menard leaves behind a wife and three children, Lavoie said. He had worked for the department since 2010.

“To have this cruel loss this morning is almost more than one city can bear," City Manager Edward Augustus said.

The Menard family was scheduled to depart for a vacation to Disney World after his shift ended Wednesday, according to Michael Papagni, president of the city firefighters’ union.

“They are now instead planning a hero’s sendoff,” he said.

The fire department in Worcester, the state’s second-largest city, has seen its share of tragedy.