Full ceremony: Biden awards Medal of Honor to 3 US soldiers

A Medal of Honor ceremony was held on Dec. 16, 2021, at the White House for Sgt. 1st Class Christopher Celiz and Sgt. 1st Class Alwyn Cashe, who were both killed while serving, and Master Sgt. Earl Plumlee.

WASHINGTON - President Joe Biden awarded the Medal of Honor on Thursday to three U.S. soldiers who distinguished themselves by acts of valor while fighting wars in Afghanistan and Iraq.

The Medal of Honor is the U.S. government’s highest military decoration for service members who displayed great personal bravery or self-sacrifice, risking their own lives and going "above and beyond the call of duty."

The medal was awarded posthumously to Sgt. 1st Class Christopher Celiz, an Army Ranger who died after stepping between Taliban fighters and a U.S. helicopter evacuating wounded in 2018, and Sgt. 1st Class Alwyn Cashe, 35, who suffered fatal injuries in Iraq while rescuing fellow soldiers from a burning vehicle in 2005.

It was also awarded to Master Sgt. Earl Plumlee, a Special Forces soldier who fought off Taliban insurgents after a massive attack in Afghanistan in 2013.

"While today we honor three outstanding soldiers whose actions embody the highest ideals of selfless service, we also remember the high price that military members and their families are willing to pay on behalf of our nation," Biden said during the ceremony in the East Room of the White House.

The president said the U.S. has "only one truly sacred obligation," which is to care for military members and their families.

"That commitment never expires, and as commander-in-chief, I promise that's a commitment that we will keep," he added.

Cashe became the first Black U.S. service member to receive the Medal of Honor for actions since Vietnam. He was on patrol near Samarra, Iraq in October 2005 when the Bradley Fighting Vehicle he was commanding was attacked with small arms fire and a roadside bomb that set it flame. Cashe pulled six fellow soldiers from the burning wreckage and suffered devastating burns himself.

"When medical evacuation helicopters began to arrive, he selflessly refused evacuation until all of the other wounded soldiers were first evacuated," the White House said in a statement. "Sergeant First Class Cashe’s heroic actions, at the cost of his life, saved the lives of his teammates."

Cashe, who grew up in Oviedo, Florida, died from his burns at a Texas hospital the following month. Three of the soldiers he pulled from the flaming vehicle also perished.

His sister, Kasinal Cashe White, was at her brother’s bedside when the Army infantryman died.

"I’ve been waiting on this so long," said White, who compared her elation at the news to winning the lottery.

"My baby brother will go down in history," White previously told the Ledger-Enquirer. "His name and his actions will be forever memorialized."

Celiz, 32, was leading an operation to clear an area of enemy forces in Paktia Province, Afghanistan, when his team came under attack. As a medical evacuation helicopter arrived to recover a casualty, it came under sustained enemy fire.

Celiz exposed himself to heavy fire as he led the evacuation. As the casualty was loaded into the helicopter and his team returned to cover, Celiz remained at the chopper, returning fire and constantly repositioning himself to shield the aircraft and its crew.

As the helicopter lifted off, Celiz was hit by enemy fire. Though injured, he motioned to the aircraft to depart rather than remain to load him and risk further casualties. He died of wounds he received on July 12, 2018.

Celiz was a South Carolina native and had enlisted in the Army in 2006.

"His selfless actions saved the life of the evacuated partnered force member and almost certainly prevented further casualties among other members of his team and the aircrew," the White House said.

Plumlee was serving at a base in Ghazni, Afghanistan, when it came under massive attack, with insurgents blowing a sixty-foot breach in the base’s perimeter wall.

He killed two insurgents, one with a well-placed grenade and the other by using precision sniper fire to detonate the insurgent’s suicide vest. He engaged several others at close range.

At one point in the battle, an insurgent detonated his suicide vest, mortally wounding a fellow U.S. soldier. 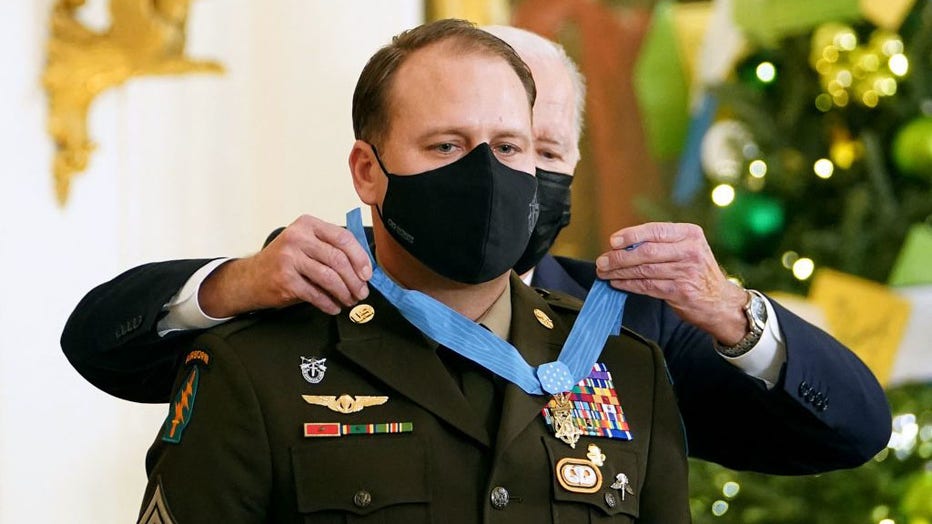 President Joe Biden presents the Medal of Honor to U.S. Army Master Sergeant Earl D. Plumlee during a ceremony in the East Room of the White House in Washington, D.C. on Dec. 16, 2021. (Photo by MANDEL NGAN/AFP via Getty Images)

"Staff Sergeant Plumlee, with complete disregard for his own safety, ran to the wounded soldier, carried him to safety, and rendered first aid," the White House said. "He then organized three Polish Soldiers for defense, methodically cleared the area, remained in a security posture, and continued to scan for any remaining threats."

He is currently serving with the 1st Special Forces Group at Fort Lewis, Washington.

RELATED: Medal of Honor to be awarded posthumously to soldier who saved lives in Iraq from suicide bomber