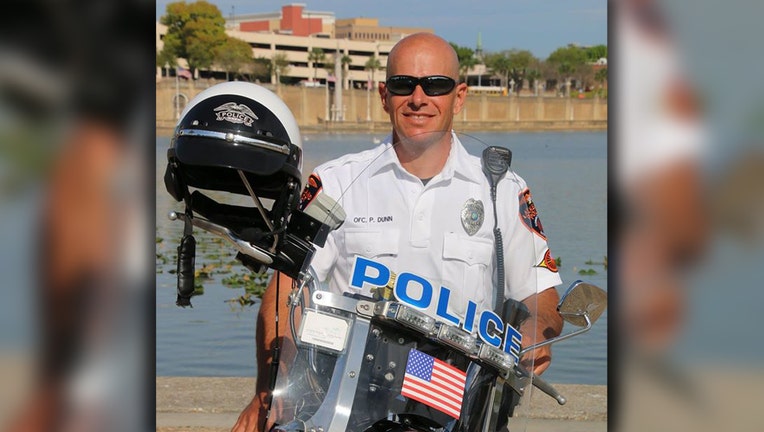 LAKELAND, Fla. - The funeral for Lakeland police officer Paul Dunn is open to the public.

On Wednesday, visitation will take place from 11 a.m. to noon at Lakes Church, which is formerly known as the First Baptist Church at the Mall. It is located at 1010 East Memorial Boulevard in Lakeland.

Funeral services will begin at noon with police honors taking place outside the church after the services.

Dunn’s family respectfully asks that no filming or photography take place inside the church. They also ask anyone who wishes to attend to wear clothing that supports the military or University of Florida attire in honors of his military service and love for the Florida Gators football team.

A procession is scheduled to leave the church between 1:30 p.m. and 2 p.m. It will head south on North Lake Parker Avenue, and then south on Bartow Highway to the Lakeland Memorial Gardens Funeral Home, located at 2125 Bartow Road.

Officials at the Lakeland Police Department encourages the public to show support to Officer Dunn’s loved ones along the route as the procession makes its way to the funeral home.

There will be no graveside or additional burial services as a private family ceremony will be scheduled at a later date.

Officer Dunn was a motorcycle police officer for the Lakeland Police Department. He was killed last week when he hit a median and crashed near the intersection of Lake Miriam Drive and Lakeland-Highlands Road. He was 50 years old.

He was a US Marine Corps veteran. After leaving the military he worked for the Polk County Sheriff’s Office for 12 years before joining the Lakeland Police Department as a member of their traffic unit. He was with the agency for five years.

Officer Dunn was married and with one adult daughter, two adult sons and two stepdaughters. Dunn’s wife is a detective with the Lakeland Police Department. Both of his sons are currently serving in the armed forces. Dunn is also a veteran of the United States Marine Corps.