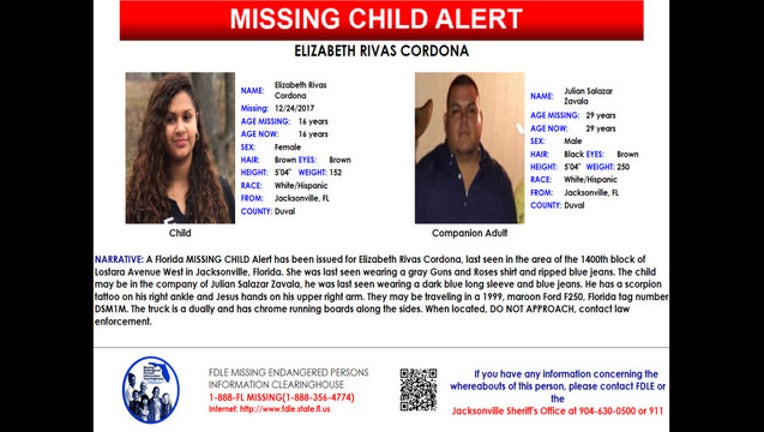 JACKSONVILLE (FOX 13) - Update: The missing child alert has been canceled. The teen has been found.

Previous: The Florida Department of Law Enforcement has issued a missing child alert for a teen from Jacksonville.

16-year-old Elizabeth Rivas Cordona was last seen in the area of the 1400 block of Lostara Avenue West in Jacksonville.

Cordona might be in the company of Julian Salazar Zavala who is 29-years-old, 5 feet 4 inches, 250 pounds, black hair and brown eyes. He was last seen wearing a dark blue long sleave shirt with blue jeans. He has a scorpion tattoo on his right ankle and Jesus hands on his upper right arm.

They may be traveling in a 1999 maroon Ford F-250, Florida tag number DSM1M. The truck has chrome running boards along the side.

Investigators say, "The circumstances surrounding their departing and failing to return at this time are being considered suspicious."

If you think you see either one, police say do not approach the subject. Instead, call 911.