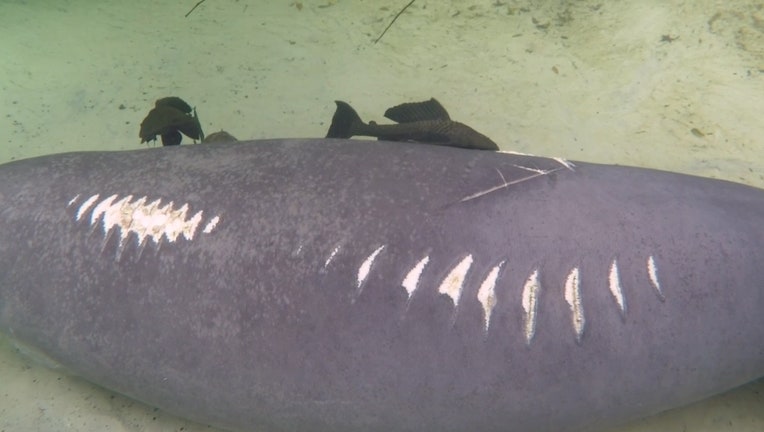 TAMPA, Fla. - The manatee exhibit is a popular one at ZooTampa at Lowry Park. As a patient observer, it's common to see young children exclaiming with joy and sprinting toward the observatory windows with their parents being pulled along in tow. When visitors peer through the glass, they're greeted by the whiskered faces and beady eyes of the "cows of the sea" -- a staple of Florida's waterways.

"Manatees are these majestic creatures," Jaime Vaccaro, the Florida mammals department supervisor at ZooTampa, told Fox News. "I want them to be around for years to come and for people to be able to enjoy them and see them."

But after years of conservation efforts in Florida to save the manatees -- by creating "no wake" zones for boaters and increasing awareness -- manatee deaths are rising again. 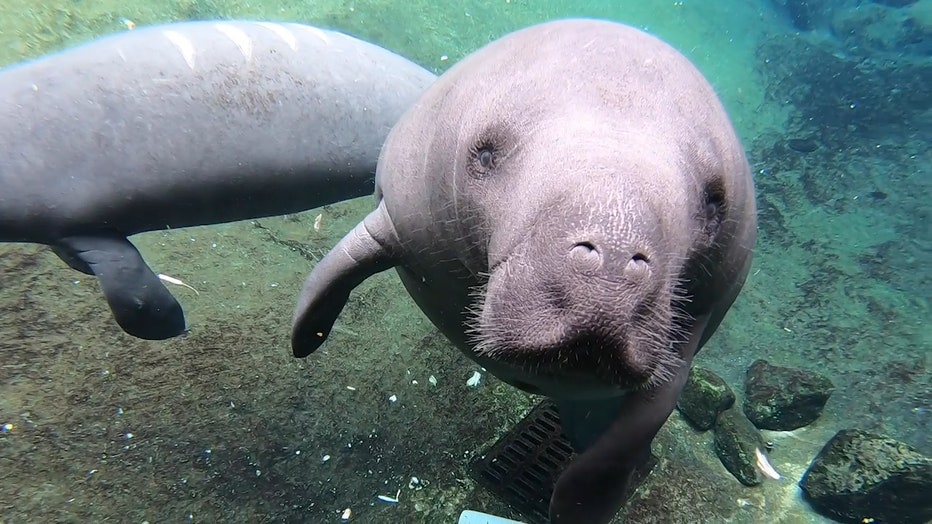 Each manatee at ZooTampa is there by way of rescue. Vaccarro explains that all of the manatees in their care are in the process of being rehabilitated.

One manatee, just over 1-year-old, is named Templeton. He's been at ZooTampa just under four months after a boat propellor gashed his back, leaving a trail of scars.

"He is definitely a super tough guy," said Vaccaro. "He has all those strikes on his back, and that was a lot to him. Manatees are very susceptible to boat injuries."

So susceptible, in fact, that it is actually uncommon to find a manatee in the wild today that has not come within an inch of its life and been hit by a boat. The Florida Fish and Wildlife Conservation Commission (FWC) estimates that at least two-thirds of all manatees have at one time been a boat strike victim.

"I would say it's probably more," Martine de Wit, a veterinarian with the FWC, told Fox News. "If you look at older manatees, they all bear the scars from being hit by boats. Ironically, we also base research on that and we identify individuals by the scar patterns. I would say all manatees get hit by boats within their first few years of life." 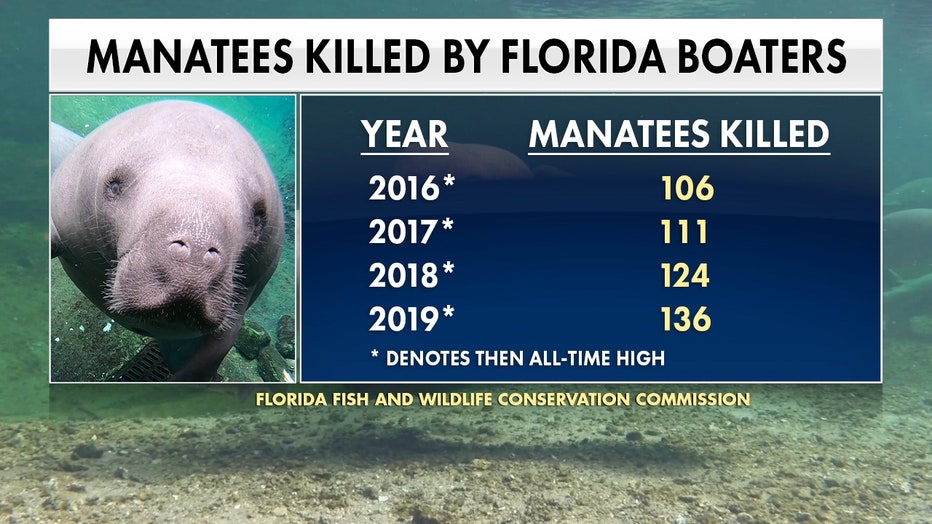 ZooTampa serves as a manatee critical care center, which means that when the FWC receives a call for an injured manatee and rescues it, the zoo is a potential next stop.

"When we have animals come in due to watercraft injuries it’s pretty heartbreaking," Dr. Lauren Smith, one of ZooTampa's staff veterinarians, told Fox News. "Outwardly there can be really nasty wounds but the other part we have to consider is these guys will also endure a lot of internal damage. They’ll get fractured bones, luxated ribs — it’s catastrophic."

While the issue of boat strikes is not a new one for the manatee population, watercraft mortality deaths are swiftly rising in Florida. Numbers show that in 2014, 69 manatees were killed by Florida boaters. But as of this past year, the number now sits at a record 136 watercraft mortalities. In fact, each of the last four years was, at the time, an all-time high.

Data from the Florida Fish and Wildlife Conservation Commission:

* Denotes a then all-time high

Conservationists and care specialists alike are uncertain why this number is rising. One hypothesis De Wit presents is that there are more boaters on the Florida waterways and more manatees swimming in those areas.

RELATED: MANATEE SHOCKS FLORIDA MAN WHEN IT COMES ASHORE TO MUNCH ON GRASS

Another thought is that there are more manatees now in Florida collectively. The U.S. Fish and Wildlife Service says that in 1991, there were less than 1,300 manatees in Florida waters. Today, the number is estimated to be over 6,000. As a result, manatees were reclassified from "endangered" to "threatened" in 2017.

"I actually think it's highly likely they'll return to the endangered species list," Patrick Rose, the executive director of the Save the Manatee Club in Maitland, Fla., told Fox News. "But I'm going to work every day to make sure that doesn't happen."

Rose believes the reclassification was premature and that boaters may be a bit more complacent around manatees as a result.

Another point brought up by Rose is that two other common killers of manatees, red tide and cold water temperatures, are not really within humanity's control. As a result, both can vary greatly year-to-year, but both can be deadly.

In 2018, 824 total manatees were killed with red tide and cold shock blamed for over 200 of those deaths. Conversely, in 2019, there were 606 manatees killed and fewer estimated deaths related to those threats.

Since watercraft mortalities are more controllable by humans, Rose believes it's imperative to get the number down in order to help keep the population stable and offset the red tide and cold shock deaths.

"It all comes with people understanding that [boaters] can play a part above what they're required to do by joining in, caring, slowing their boat down, being more civil to their fellow boater, paying attention on the waterway and sharing the waterway," said Rose.

In addition to observing manatee speed zones, the FWC encourages boaters to wear polaroid sunglasses to better see manatees and to report any injured or dead manatees to them.

But even though the watercraft mortality numbers are rising, there is a silver lining. Organizations around the state are saving and rehabilitating dozens of manatees a year.

ZooTampa says that they will typically rehabilitate over 20 on an annual basis and return many of them to the Florida waterways. Later this week, Templeton will be one of them.

Below is a video from a 2017 release from the ZooTampa at Lowry Park Facebook page:

"That special day comes when they're cleared for release and you get to give them a second chance at life," said Vaccaro. "I'm not going to lie I tear up at every single release."