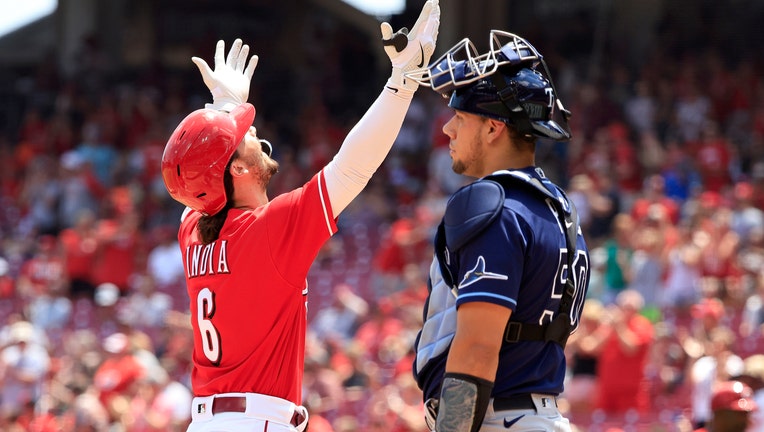 CINCINNATI, OHIO - JULY 10: Jonathan India #6 of the Cincinnati Reds celebrates after hitting a two-run home run in the game against the Tampa Bay Rays at Great American Ball Park on July 10, 2022 in Cincinnati, Ohio. (Photo by Justin Casterline/Gett

CINCINNATI, Ohio - Mike Moustakas, Tyler Stephenson and Jonathan India each hit a two-run homer in the third inning and the Cincinnati Reds beat the Tampa Bay Rays 10-5 Sunday for a three-game sweep.

Moustakas connected for his 200th career homer as the Reds posted their first four-game winning streak since May 25-28. It was his first home run since May 13 and fourth of the season.

The Reds opened the series with back-to-back, 10-inning wins, including Friday night's game that ended on a balk. Cincinnati broke away early in the wrapup, scoring seven times in the third off rookie Shane Baz (1-2).

Rookie left-hander Nick Lodolo (2-2) was the beneficiary of the homer barrage. In his second start since coming off the injured list and fifth overall, Cincinnati’s top 2019 draft pick allowed nine hits and three runs in five innings, striking out six.

Tyler Naquin added a two-run double for the Reds.

The Reds rocked Baz for eight hits and seven runs in 2 1/3 innings. The right-hander had allowed a combined three runs in 22 1/3 innings over his previous four starts.

Reds: Sunday’s game was the seventh straight missed by 1B Joey Votto (lower back tightness).

Rays: The starting pitcher remained to be determined for Monday’s series-opener at home against the Red Sox.

Reds: Rookie RHP Graham Ashcraft, Tuesday’s starter at Yankee Stadium, lasted 2-13 innings in his last start on Wednesday against the Mets, the shortest outing of his nine outings.