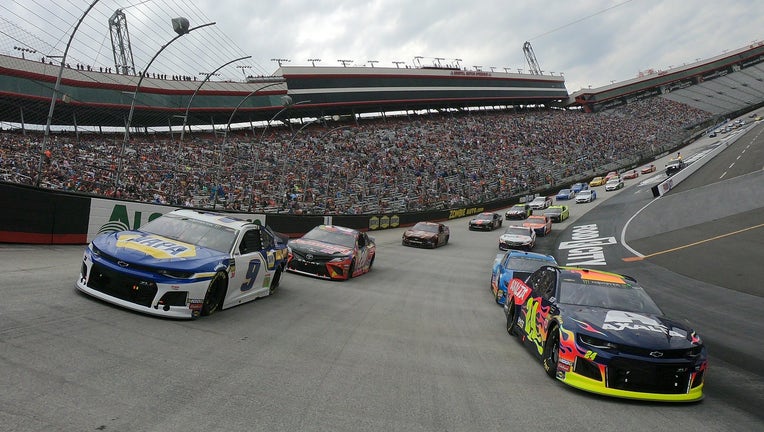 Chase Elliott, driver of the #9 NAPA Auto Parts Chevrolet, and William Byron, driver of the #24 Axalta Chevrolet, lead the field at the start of the Monster Energy NASCAR Cup Series Food City 500 at Bristol Motor Speedway on April 7, 2019 in Bristol,

CHARLOTTE, N.C. - NASCAR is set to allow up to 30,000 fans at the track in Bristol next month when it moves the All-Star race out of Charlotte Motor Speedway for just the second time in the history of the race.

If the expected attendance count holds, NASCAR would open to the largest gathering of sports fans in the United States in the wake of the coronavirus pandemic -- all while numbers in some states continue to spike.

NASCAR is set to brush off those concerns and open the gates in Tennessee. Bristol holds about 146,000 fans.

The recent spike of COVID-19 cases in North Carolina sparked the move to Bristol Motor Speedway. The race will remain on the July 15 date with a 7 p.m. start time.

Related: NASCAR driver races in 'Back the Blue' car in support of law enforcement

According to the track's website, fans will not be required to wear masks, but will be "highly encouraged" to do so.

“The NASCAR All-Star Race is an event known for making history, and we will enhance that legacy by hosting the event at Bristol Motor Speedway,” said Speedway Motorsports President and CEO Marcus Smith. “While Charlotte will always be recognized as the birthplace and traditional home for the All-Star Race, the current data surrounding the pandemic in North Carolina makes Bristol a better option for fan access this summer.”

The race was originally scheduled for May 16 at Charlotte. It has been held at the track nearly every year since its inception in 1985. The 1986 race was run at Atlanta Motor Speedway.

“We look forward to bringing this thrilling race to a short track for the first time, and we hope our fans enjoy this special event, under the lights,” said NASCAR Executive Vice President of Racing Development Steve O’Donnell.

NASCAR allowed 1,000 fans of mostly military personal this past weekend at Homestead-Miami Speedway is expected to have no more than 4,000 fans for the Cup race at Talladega Superspeedway.

Bristol’s health protocols will be finalized with continued guidance from public health officials, medical experts, local, state and federal officials, and in coordination with NASCAR. Fans will be allowed to bring in one soft-sided clear bag with food and beverage. Coolers will be prohibited and souvenirs will be sold only from concourse areas. Campground shower facilities will be closed.