NASCAR has vowed to do a better job at addressing racial injustice.

HOMESTEAD, Fla. - A NASCAR driver raced in a car with a “Blue Lives Matter” flag on its hood and the phrase #BackTheBlue emblazoned on its sides during a pair of races over the weekend in Florida.

The move came days after Bubba Wallace, the only black driver at NASCAR’s top level, drove with a special "Black Lives Matter" paint scheme on his car. NASCAR also decided to ban the Confederate flag from its races and tracks, following Wallace’s call to do so. 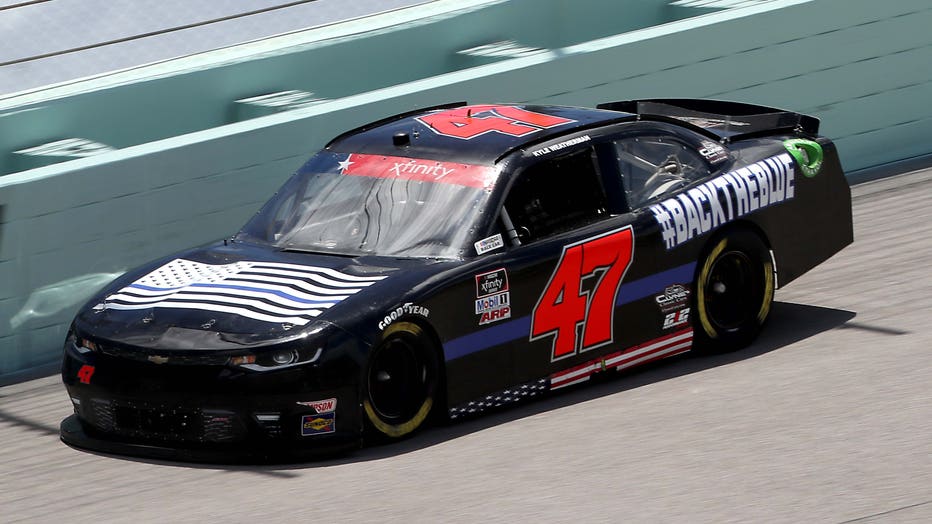 Kyle Weatherman, driver of the #47 Back The Blue Chevrolet, races during the NASCAR Xfinity Series Contender Boats 250 at Homestead-Miami Speedway on June 14, 2020 in Homestead, Florida. (Photo by Chris Graythen/Getty Images)

On Saturday, Mike Harmon Racing unveiled the “Thin Blue Line” paint scheme on the Chevy Camaro, driven by Kyle Weatherman during the Xfinity Series races at the Homestead-Miami Speedway.

"Mike Harmon Racing supports our (law enforcement officers) and First Responders, we THANK YOU for your service, sacrifice and dedication," the group tweeted.

The vehicle’s flag resembled the American flag but in black and white with a blue line down the middle. The flag is meant to symbolize law enforcement.

The space above the blue line on the flag represents society, order and peace, while the space below symbolizes crime and chaos. The thin blue line running between them represents law enforcement, keeping crime separated from society, according to Thin Blue Line USA, a website offering law enforcement clothing and accessories to support police nonprofit charities.

The Blue Lives Matter movement advocates for police and others in law enforcement. It started in response to Black Lives Matter, a movement which began in 2013 and has gained renewed attention in recent weeks following the death of George Floyd and other black Americans.

Floyd, an unarmed black man, was killed May 25 after a white Minneapolis police officer knelt on his neck for several minutes, even after pleas from Floyd that he couldn’t breathe. Widely shared video of the encounter sparked protests in cities across the country and around the world — continuing the call of Black Lives Matter organizers for racial justice and an end to police violence.

"A lot going on in the world right now and I wanted to express that most first responders are good people," Weatherman tweeted ahead of the race. "My uncle is a firefighter and he would do anything to help save lives."

Weatherman finished 33rd at Saturday's race after his car had transmission issues. Responding to another driver on Twitter who suggested “people are choosing sides,” the 22-year-old said he also supports black people in the United States.

“I support the black men and women of this country and also support all first responders also. LOVE EVERYONE,” Weatherman wrote.