LAKELAND, Fla. - Nearly a dozen first responders in Polk County were recognized for their heroism at the 53rd Annual President’s Roundtable Public Safety Awards Banquet. It was held at the First United Methodist Church in Lakeland.

Although all their stories involve going far beyond the call of duty, Lt. Duane Tompkins of the Polk County Sheriff’s Office literally laid his life on the line in a hostage situation.

Last September, Tompkins was the first person on scene in North Lakeland where a gunman had massacred four family members and left an 11-year-old girl for dead.

When Tompkins arrived at the home where Riley was holed up, gunfire was coming from inside the house. Despite that, Tompkins went in. 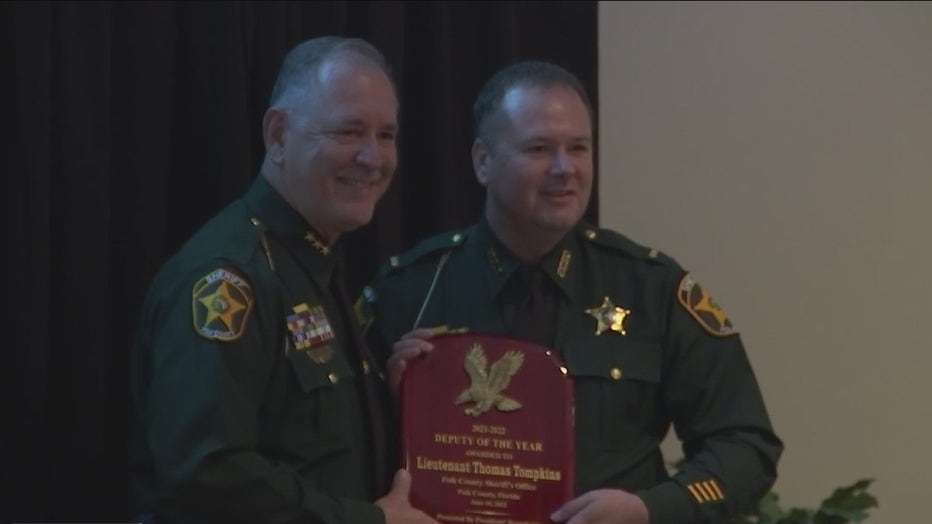 "The suspect steps out with a rifle. He’s got full body armor on. He’s got knee pads. He’s got a medical kit. He steps out and begins firing at me," Tompkins said.

RELATED: Sheriff: ‘Survivalist’ on meth kills 4, including infant, fires at deputies before surrendering

The deputy fired back, and eventually, Riley was arrested.

When Tomkins found the little girl, he realized that she had been shot multiple times, but was still alive. The only reason why the girl survived is because she pretended she was dead, so Riley would move on.

Tompkins is still trying to move on.

"There is no sleep your appetite changes. Your stress levels are all over the place," he said.

The ceremony also recognized other first responders for their valor: