At 4:30 Sunday morning, his 1998 pickup went from sparkling white to aflame in orange and then charred in a matter of minutes.

Indeed, Ford recalled several of its models to fix cruise control deactivation switches that were causing fires. Jeff still had the paperwork from the recall and repair.

He doesn't know for sure, but he suspects that's what caused this, and why he contacted FOX 13.

"That is really all I am trying to do, to prevent this from happening to someone else," Hunter explained. 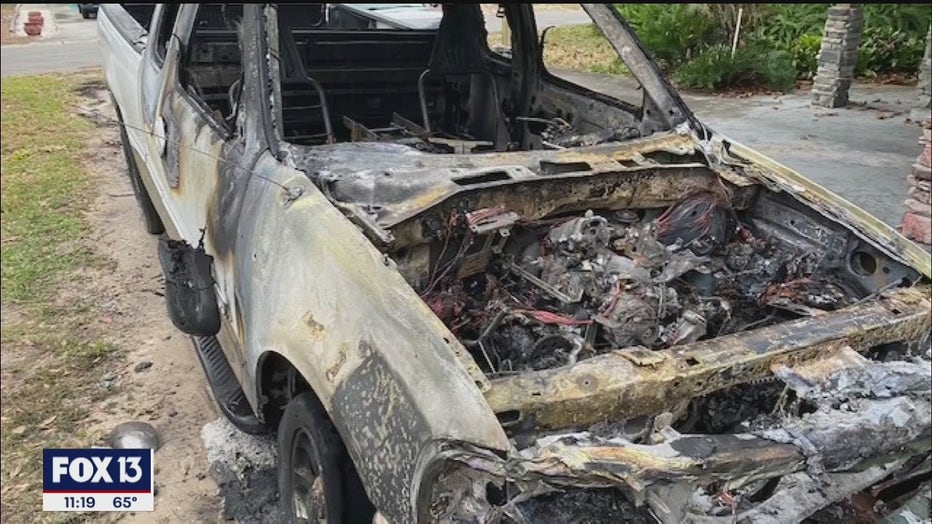 All that remains of Hunter's pickup is a burned-out shell

He says a lawyer told him it would not likely be financially worth it to go through a lawsuit over a 23-year-old truck. Tampa consumer lawyer Billy Howard says winning a case would be tough, but not impossible.

"There is some typical wear and tear on a vehicle," said Howard. "Especially after that time frame. But it is pretty easy to figure out the origin of a fire."

Jeff says the truck was a total loss and if he hadn't been woken up by an alert neighbor, he might have lost much more than his old friend.

"My neighbor came beating on my door," he said. "My neighbor, I believe, helped save my home if not my life."

Ford has recalled 15,000,000 vehicles over the last two decades because of faulty cruise control switches.

Autosafety.org says the switches can fail over time because they run continuously even when the vehicle is not in operation.

By 2004, they had gotten three dozen reports of seemingly spontaneous fires.