As dozens of desperate Pasco County residents searched for help at the Flood Recovery Center that opened Wednesday, flood victims braced for more rain that could cause more flooding by the end of the weekend.

Annette Doying, the county's Emergency Management Director, said the initial rush at the Flood Recovery Center on State Street took her and county staff by surprise.

"Unfortunately I think we aren't fully built out to meet the need," she said.

Doying said the number of residents looking for relocation assistance was more than expected; officials prepared based on the number of people who stayed in shelters, which was several dozen.

As the facility's 7 p.m. closing time approached, roughly 70 families had stopped by.

"Part of what's happening here is that people are coming here with an expectation that they're going to get a bit of their needs met right away," Doying said. "It's not necessarily happening as fast as they thought it might happen."

Doying said the county planned to expand into a larger office at the same facility by Thursday and may add additional staff.

She also said the time it takes to find to people new homes or apartments can vary based on each situation. County workers are trying to determine who qualifies for relocation; it has to meet certain standards to be a necessity.

The Flood Recovery Center will remain open for several days.

In the meantime, Pasco emergency managers are preparing to take officials from the Federal Emergency Management Agency into the hardest hit areas Thursday to survey the damage. The hope is that this will be a stop toward getting a presidential disaster declaration.

FEMA's schedule, however, is up in the air with more rain predicted and more flooding possible.

"It's just been really devastated. I just don't know what I'm going to do if it's going to rain anymore," said Ralph VerVers, who lives in the Griffin Park neighborhood and hasn't left his home even though his yard is under water. "I just try to deal with it as best I can."

Doying identified Griffin Park as a community that is still partially flooded and could face significant flood damage if there are heavy rains. The Bass Lake area, which also remains flooded, could see conditions worsen.

County workers have been going door-to-door in those neighborhoods and several others, checking to see if residents have any essential needs like food, water or medicine.

Doying is also urging homeowners in all areas that have already flooded during the last three weeks to prepare to get out an evacuation recommendation is given. 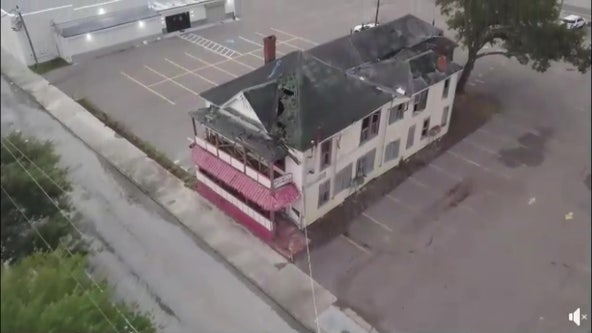