If you think that COVID-19 is almost over, think again. There has been a spike in cases in Polk County that is following a national trend.

Florida is now issuing coronavirus data only once a week. The Department of Health stopped reporting daily coronavirus statistics in early June at the direction of Gov. Ron DeSantis.

"COVID-19 cases have significantly decreased over the past year as we have a less than 5% positivity rate, and our state is returning to normal, with vaccines widely available throughout Florida," press secretary Christina Pushaw told The News Service of Florida at the time.

The weekly reports are issued each Friday. According to the summary released on June 16, Florida tallied 45,603 new coronavirus cases for the week of July 9-15. That’s nearly double the previous week’s total of 23,562 and roughly triple the week before that, which was 15,998.

The state also added 59 new deaths last week for a total of 38,388 since the pandemic began. 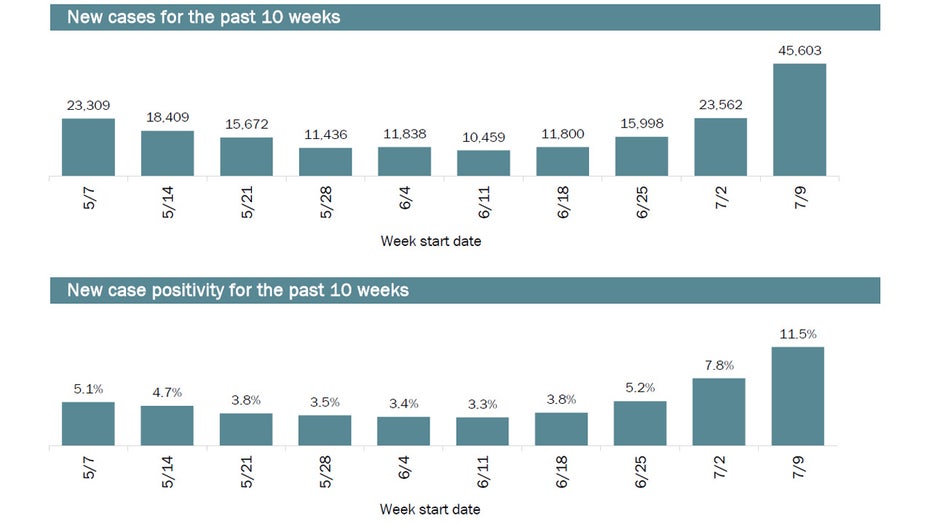 Meanwhile, the number of vaccinations administered weekly has fallen by almost 80% statewide since April even though less than 60% of the population 12 and older is fully vaccinated.
Florida saw 224,326 vaccine doses administered last week, the lowest in at least 10 weeks.

The state now has the fourth-highest per-capita hospitalization rate in the U.S., behind Nevada, Missouri and Arkansas, according to Jason Salemi, a University of South Florida epidemiologist tracking the national outbreak for more than a year.

The spike in new cases appears to be the largest increase since a bump in April and is on pace to rival the much larger peak from last winter.

At an Orlando new conference, DeSantis blamed the new outbreak on the disease’s seasonal pattern.

"We knew it was going to be low in May and it was. And we knew that at the end of June and July it would go up, because that’s what happened last year," said DeSantis, who has been vaccinated.

But Salemi said Florida reported 20% of the nation’s new coronavirus cases over the last two weeks even though it makes up just 6.5% of the population. He and other epidemiologists and doctors interviewed blame the spike on the state’s slowing vaccination rate, a decrease in mask wearing and social distancing and the delta variant.

"It is extremely concerning because we’ve already seen what this more transmissible delta variant can do in places like India and Indonesia with a disproportionately low access to vaccines," Salemi said.

Dr. Frederick Southwick, chief of the University of Florida medical school’s infectious disease division, said computer simulations show the delta strain will create "a marked surge in cases over the next three months."

"The delta variant grows faster in human cells and can spread to others particularly in closed spaces even when wearing a mask," he said. "The only effective way to be protected from the delta variant is to get vaccinated."

Politics does impact vaccination rates, as some national conservative media personalities and politicians have downplayed or shown hostility toward inoculation programs. The state’s lowest rates are in conservative rural north Florida — in some counties, fewer than 30% of adults are vaccinated.

Positivity rates in those areas, though, were the highest in the state. Liberty County reported a rate of 35.4% for the last week; Baker County was over 30%, Bay and Bradford counties were over 25%.

PDF: See the full weekly report from the state