Modern streetcar lines are up and running in cities like Atlanta, Seattle, Washington,&nbsp;Kansas City, and Detroit, where the streetcar line is called The Q.

TAMPA, Fla. - Some see Tampa's streetcars as a blast from the past, but Ben Limmer sees them in Tampa's growing future.

Limmer said, to keep up with new buildings and more people, Tampa's streetcars need a boost.

"There's really been a streetcar renaissance going on in the United States," he explained.

HART has plans for a new generation of sleeker, faster, and larger streetcars, some of them more than 70 feet long.

Modern streetcar lines are up and running in cities like Atlanta, Seattle, Washington, Kansas City, and Detroit, where the streetcar line is called The Q.

"The Q is named after Quiken Loans," said Limmer. "So there might be interest in sponsoring our line in the future."

Publix is already sponsoring a streetcar stop in Channelside. TECO has been a long-time sponsor. More could come from Jeff Vinik's Water Street and other new projects.

Last November, Hillsborough County voters approved a one-cent sales tax increase for transportation. Planners say when it clears the courts the funds will help build streetcar tracks in more of downtown along with new streetcar lines stretching from Whitiing Street to Palm Avenue. 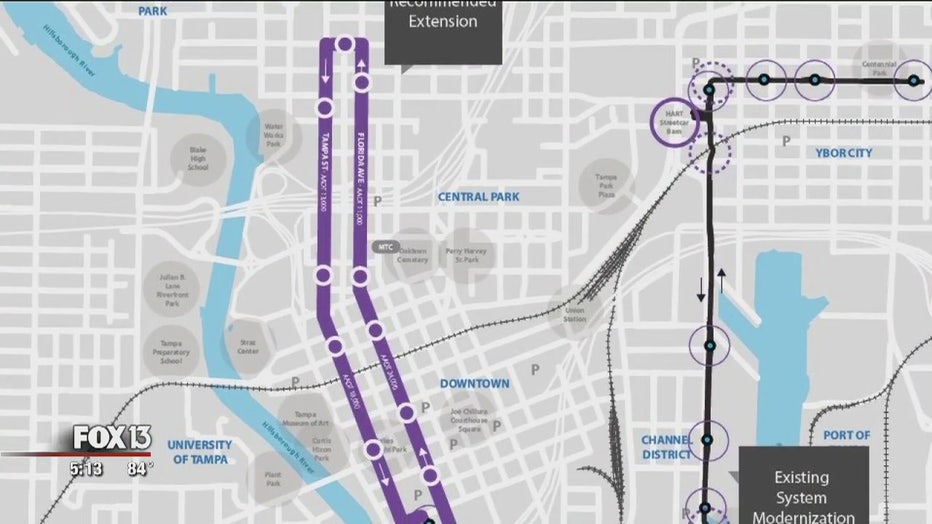 "We'll finally have a connection from downtown to Tampa Heights," said Limmer.

As for Tampa's historic streetcars, he hopes they can be kept for special occasions.

The new trains will run on the same kind of tracks. Limmer said he expects Tampa will have new streetcars by 2024 or 2025 and there is no cost estimate yet. He anticipates federal and state funding, transportation tax revenue, and sponsorships will pay for the streetcars.

Limmer says he hopes the new streetcars will be no fare or low fare. Ridership on the existing streetcars has tripled over the past year since a state grant allowed HART to eliminate fares and expand service hours.