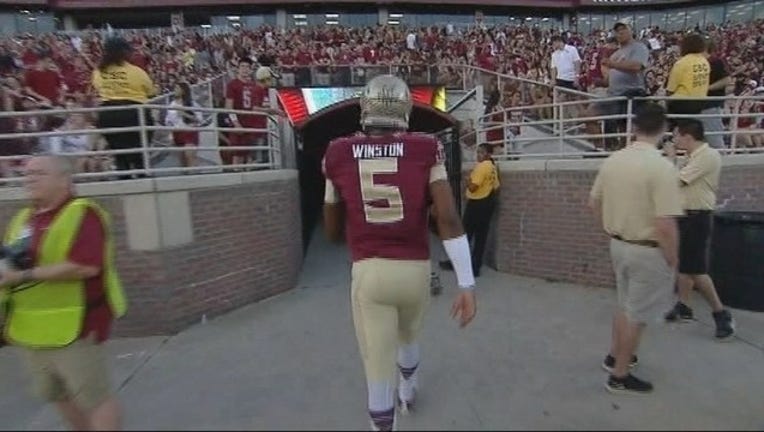 Commissioner Roger Goodell says Chicago has "overdelivered" as host of the 2015 NFL draft. And the picks haven't even begun. Here are five things to watch for in the first round Thursday night:

CHARACTER: General managers, coaches, scouts and owners always insist that a player's character is a key component in who gets selected, especially in the opening round.

The 32 teams who will go on the clock Thursday have more than the usual tough decisions ahead. The NFL comes off a year marked by domestic abuse cases that placed the names Ray Rice, Adrian Peterson and Greg Hardy in the spotlight for their off-field misbehavior, not their on-field skills. The last thing the NFL wants or needs is a slew of prospects with character problems being selected high in the draft.

Yet there are quite a few, from likely first overall choice quarterback Jameis Winston of Florida State to defensive end Shane Ray of Missouri and linebacker Randy Gregory of Nebraska.

"I'm not sure that you'll ever be able to predict how a human being is going to respond or react," Raiders coach Jack Del Rio said. "That's one of the things that makes the draft unique. As scientific as we try to make it, you're still dealing with human beings and what motivations they have, where they are in their life, how mature they are. Some guys that had problems in their college years grow up and mature and they become great people, great citizens, great husbands and great players. Some don't.

"Some that were very clean the whole time in college and had no issues at all, all of a sudden they make some bad decisions. We're still talking about human beings. We're very thorough in what we're doing, collecting information and then you make decisions. Any time you're dealing with human beings, there is a margin for error that has to be understood."

QUARTERBACKS: Winston and Oregon's Marcus Mariota, the two most recent Heisman Trophy winners, by far are the top-rated players at the key position. They easily could go first to Tampa Bay and second to Tennessee - or some team that trades up.

Beyond them, any QBs going early would be a reach. Ranked next are Brett Hundley of UCLA, Bryce Petty of Baylor and, well, who knows? Not exactly the 1983 or 2004 crop.

POTENTIAL TRADES: Several personnel people quietly say they expect lots of bartering in this draft, particularly in the first two rounds. Teams dealing from strength would be Cleveland (12th and 19th) and New Orleans (13th and 31st). The Browns have their own pick and Buffalo's, the Saints own theirs and Seattle's for Jimmy Graham.

Speculation on possible dealers has centered on Philadelphia's Chip Kelly, who coached Mariota in college; San Diego, which can't seem to get quarterback Philip Rivers interested in a contract extension; and the Seahawks, who would like to climb back into the opening round.

RUNNING ON EMPTY: Running backs have not been a top commodity in recent drafts as the NFL has gone pass crazy. Teams tend to look for ball carriers in later rounds, but this draft has a strong group.

Will Todd Gurley of Georgia break into the Thursday festivities now that he has a clean bill of health after a major knee injury? Will 2,000-yard man Melvin Gordon go on opening night?

DEFENSE, DEFENSE: A high priority almost certainly will be placed on the defensive side of the ball in the first round, even if Ray and Gregory plummet. Such standouts as linemen Leonard Williams of Southern Cal, Danny Shelton of Washington, Arik Armstead of Oregon, and Malcom Brown of Texas should go. Ditto linebackers Dante Fowler Jr. of Florida, Vic Beasley of Clemson and Shaq Thompson of Washington; DBs Trae Waynes of Michigan State, Landon Collins of Alabama, and Kevin Johnson of Wake Forest.