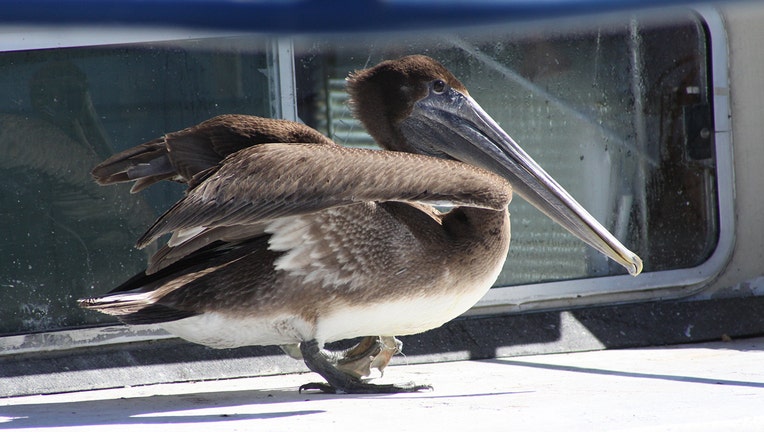 FWC captured this image of an injured pelican who had a fishing lure hooked to the webbing of his feet. (Florida Fish and Wildlife Conservation Commission)

ST. PETERSBURG, Fla. - Those living in St. Petersburg know the brown pelican as the unofficial symbol for the city. They flock near the site for the St. Pete Pier. They are seen soaring beyond the coastline of Tampa Bay. They are even engraved in the city flag.

But for decades the brown pelican has never been named the official bird of St. Petersburg – until now.

“We’ve always been about sunshine and pelicans in @StPeteFL, but today – after 117 years of being reincorporated as a City – we made the Brown Pelican official,” mayor Rick Kriseman announced on Twitter Thursday.

The brown pelican is located on both coasts of North and South America, according to the Florida Fish and Wildlife Conservation. In Florida, they are widespread along the coast and can be seen inland during their non-breeding season.

Their population once suffered a severe decline during the 1960s and 1970s due to DDT, an insecticide. After it was banned, the brown pelican population began to thrive.

The brown pelican is protected by the U.S. Migratory Bird Treaty Act.