"We have food, water and ice for your family," said a National Guard officer, helping residents trapped by flooding after Hurricane Ian.

The church at 14380 Tamiami Trail in North Port has been turned into a point of distribution; tarps, food, water and ice are being handed out, for free.

The City of North port said water is receding, but in certain areas, including the estates it remains high.

"I think this is absolutely amazing, what a wonderful gift for the rest of us who don’t have the ability to have this in our houses," said Dough Williams.

On Sunday and Monday, more than 5,000 people were helped. The city is looking to add a second distribution point.

Hundreds of people remain in shelters days after Hurricane Ian.

"We love seeing smiles of people’s faces. It’s uplifting for us because we are out here, working hard for three days, we are out here 12-plus hours a day working making sure everybody gets what they need," said 2nd Lt. Josiah Hoogerhyde with the U.S Army Reserves. 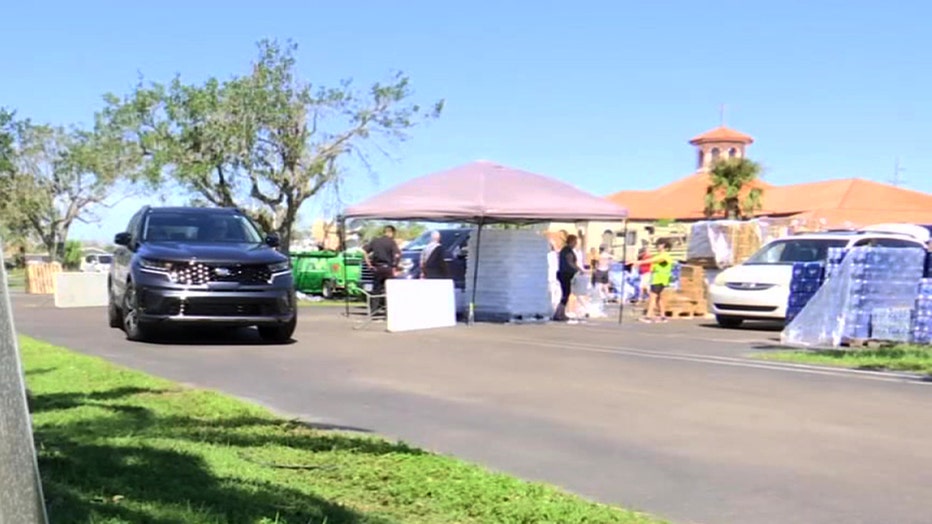 The National Guard along with FEMA and Sarasota County set up the site. Volunteers like Dave Growth are learning how to take it over.

"A lot of people need help right now. I just want to do my part and help out," said Growth.

For those who were spared by Hurricane Ian, it’s the least they could do.

"We are part of the community all the way. Community has been good to us, we are good to the community," said Christine Zagrobelny.

Those at the church promise to remain as long as there is a need within the community.

"That’s been really difficult there’s been so many people with really tragic situations, but also so many people showing heroic effort. People who’ve lost everything. Kind of trying to share their last can of goods or meals or whatever they can for their neighbor," said Fr. Nathan Marzonie with San Pedro Catholic Church.