If forced to choose, Novak Djokovic said he would skip the French Open and Wimbledon, foregoing the chance to overtake Rafael Nadal's record haul of 21 Grand Slams titles, rather than get vaccinated against COVID-19.

And the No. 1-ranked tennis player is also still smarting about being deported last month from Australia in a drama about his vaccination status that polarized opinion worldwide.

Speaking in an interview broadcast Tuesday by the BBC, the 20-time Grand Slam champion said he is still not vaccinated, and prepared to sacrifice titles to stay that way.

If need be, not defending his titles at Roland Garros and Wimbledon and missing other tournaments is "the price that I am willing to pay," said the 34-year-old Serb, comments likely to further boost his hero-status among some opponents of vaccination.

Djokovic said he is not opposed to vaccinations and sought to distance himself from anti-vaccination campaigners, saying: "I have never said that I am part of that movement."

But he said "everyone has the right to choose, to act, or say what ever they feel is appropriate for them" and that he believes in "the freedom to choose what you put into your body. And, for me, that is essential."

"I am trying to be in tune with my body as much as I possibly can," he said, adding that he has always been careful about everything he ingests. "Based on all the information that I got, I decided not to take the vaccine, as of today.

"I understand the consequences of my decision," Djokovic said. "I understand that not being vaccinated today, you know, I am unable to travel to most of the tournaments at the moment."

Asked if he would be prepared to miss the French Open in May, he repeated: "That is the price that I am willing to pay."

Also asked if would be ready to skip Wimbledon, he added: "Yes."

"Because the principles of decision-making on my body are more important than any title or anything else," he said. 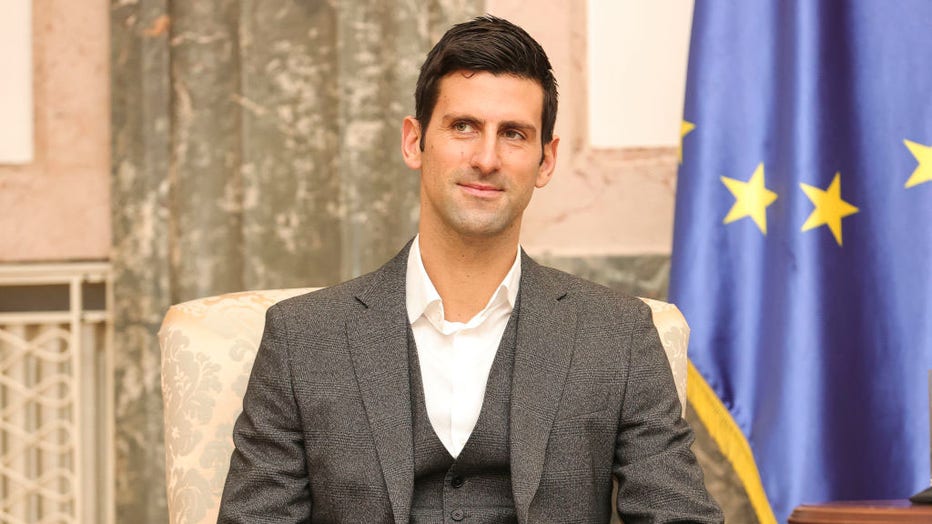 Djokovic has won the French Open twice, including in 2021, and has six Wimbledon titles, including the last three.

Nadal won this year's Australian Open, giving him one more major title than Djokovic and Roger Federer. Djokovic was deported before he could play.

Djokovic went back over the deportation drama in detail with the BBC and made clear his displeasure at how it turned out.

"What people probably don’t know is that I was not deported from Australia on the basis that I was not vaccinated, or I broke any rules or that I made an error in my visa declaration," he said. "The reason why I was deported from Australia was because the minister for immigration used his discretional right to cancel my visa based on his perception that I might create some anti-vax sentiment in the country or in the city, which I completely disagree with."

The saga began when Djokovic was granted an exemption to strict vaccination rules by two medical panels and Tennis Australia in order to play. That exemption, based on evidence that he recently recovered from COVID-19, apparently allowed him to receive a visa to enter Australia. But upon arrival, border officials said the exemption was not valid and moved to deport him.

An ensuing back-and-forth raised questions of whether Djokovic was unfairly given special treatment or unfairly singled out because of his celebrity status.

Speaking to the BBC, he said: "I never used my privileged status to get into Australia by force or do anything in this entire process."

A court initially ruled on procedural grounds that Djokovic could stay, but Australian Immigration Minister Alex Hawke, who has wide powers, later decided to deport him. The government said his presence could stir up anti-vaccine sentiments.

"I understand that there has been lots of, say, frustrations from Australian people towards me and towards the entire situation and the way it was dealt with," Djokovic told the BBC. "I would like to say that I always followed the rules."

His threats to skip the next two majors may prove to be moot.

New rules in force in England since last week allow unvaccinated people to enter with tests before and after their arrival.

Vaccination rules in France could also change in the months before Roland Garros, possibly allowing Djokovic to play. The country has started to ease some of its health and travel restrictions as it recovers from a record surge in infections fueled by the highly contagious omicron variant.

The French government last week gave an end-of-March, beginning-of-April timeframe for the possible lifting of its vaccine requirement that, at the moment, puts unvaccinated players at risk of missing the French Open.

From Tuesday, anyone who is not vaccinated against the coronavirus will need to show proof they tested positive for COVID-19 within the previous four months — down from the previous six-month window — in order to enter sports venues in France. The French law, which operates under the assumption that you have some protection from the virus if you've recently had it, aims to bar unvaccinated individuals from stadiums, restaurants, bars and other public places.

Djokovic has previously said that he tested positive in mid-December. If the four-month requirement stays in force, it is likely to rule him out of the French Open unless he gets vaccinated or tests positive again within four months of the start of the clay-court Grand Slam on May 22.