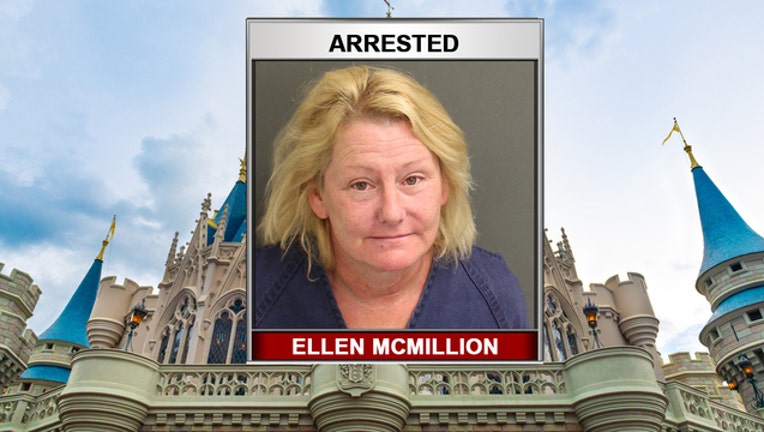 ORLANDO, Fla. (FOX 13) - A Brandon woman has been banned from Walt Disney World for life after getting into a physical fight with a taxi driver, and then kicking a deputy at one of the theme parks, authorities said.

A Disney security guard and a deputy working a detail at the park intervened after they saw her strike the driver several times. The taxi driver told deputies McMillion started hitting him after she asked him for a cigarette, and he told her he didn't have one.

Deputies said McMillion was slurring her words, appeared to be unstable on her feet, and they detected a strong odor of alcohol. The security guard became concerned she would become a threat to other park guests, according to her arrest affidavit.

The driver said he did not want to press charges, and he was not injured. Deputies said McMillion initially refused to identify herself and threw her small black purse to the ground, stating, "here."

Her Florida driver's license was located, and deputies were able to identify her. At one point, they said she was yelling profanities at multiple adults and children. McMillion also admitted -- multiple times -- to deputies that she was drunk, they said.

An Orange County deputy placed McMillion in handcuffs, and as they approached a patrol car, she attempted to pull away from the deputy's grasp, officials said. She was given verbal commands to stop, deputies said, and kicked a deputy twice.

Disney Security requested that McMillion be trespassed from all Walt Disney World properties. She was charged with battery on an officer and disorderly intoxication.