Historians said Tampa Bay is among the areas with highway designs that displaced minorities and created racial inequity.

"It’s hard to look at a map of Tampa before the interstate and knowing what was there – Central Avenue which was a really thriving African American business district dating from the 1910s going all the way up to the 1960s and seeing the Scrub and even an affluent neighborhood along the Mar Avenue, and then knowing the interchange of I-4 and 275 is literally on top of that. It’s hard to see that and not presume that race played a role in the decision for those roads to go where they went," said Rodney Kite-Powell, the director of the Touchton Map Library at the Tampa Bay History Center.

In his acceptance speech last night, Welch said he's focusing on the next steps to get this city moving more urgently. Specifically, he’s calling out housing affordability and neighborhood safety.

Kite-Powell said areas near present-day downtown Tampa were predominantly African American in the 1950s and 1960s. Back then, their voices were silenced, lacking the political and financial clout to fight highway construction.

"That was absolutely devastating, particularly for the older urban neighborhoods of Tampa Heights, but particularly Seminole Heights. Seminole Heights, it split the neighborhood in two, a neighborhood that was very cohesive," said Kite-Powell. "It also, as a side effect, created a have and have-not side that likely was entrenched through historic preservation which occurred on the west side of the interstate which did not occur as much on the east side."

Debate over changes to I-175 in St. Petersburg heats up

Those who are looking at the possibility of getting rid of a major roadway that leads into downtown St. Pete are wanting the public's input.

Those kinds of impacts reached across the bay too. The newly elected St. Pete mayor shared his personal story.

"My grandfather’s wood yard was where I-175 is, and he was displaced for the interstate. Our church was a couple of blocks north, displaced for baseball, along with 1,000 folks," said Ken Welch, mayor-elect of St. Petersburg. 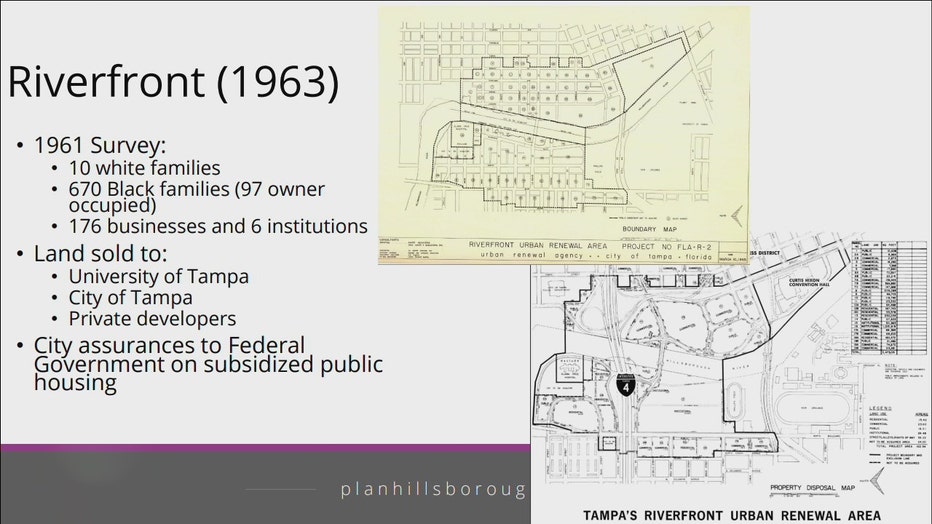 In Hillsborough County, transportation planning officials outlined in March how racism played a role in developing Tampa 70-plus years ago. Another major highway built was the Selmon Expressway. It followed railroad tracks, but its construction took out Dobyville – a Black neighborhood in Hyde Park.

St. Petersburg city leaders took another step this week toward helping revitalize a historically Black neighborhood, approving a lease for city-owned land to build a major mixed-use development in the Deuces corridor.

Research historians said it's a past to reckon with and learn from.

"That’s something that we have to come to a proper conclusion to as a society, and that’s what we want our government leaders to do is to make sure those mistakes of the past don’t become mistakes again in the present and in the future," said Kite-Powell.

Hillsborough County TPO’s March presentation included plans to rebuild equity in those affected neighborhoods. U.S. transportation secretary Pete Buttigieg said he has a similar plan but for the whole country.