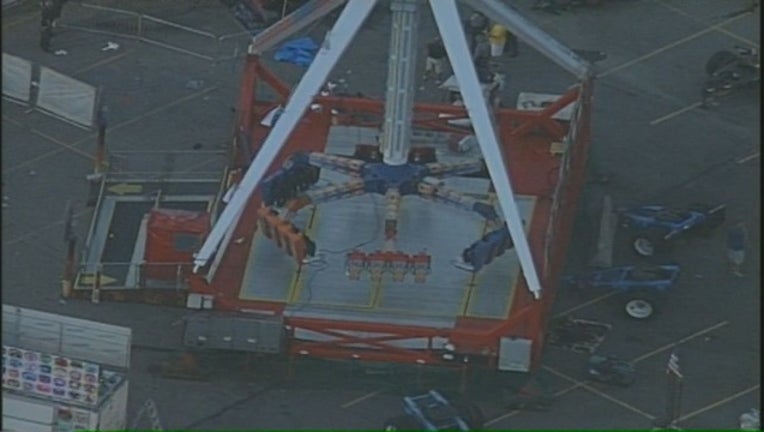 COLUMBUS, Ohio (AP) - Inspectors repeatedly looked over a thrill ride while it was assembled at the Ohio State Fair and signed off on it hours before it flew apart in a deadly accident that flung passengers into the ground, according to authorities and records released Thursday.

Investigators worked to find out what caused the opening-day wreck that killed a high school student who had just enlisted in the Marines. Seven other people were injured, including four teenagers.

The ride's Dutch manufacturer told operators of the same attraction at fairs and festivals around the world to stop using it until more is learned about what caused the malfunction.

A bystander captured the terrifying moments on camera when the ride broke apart.

WARNING: THE VIDEO IS GRAPHIC AND MAY BE DISTURBING TO SOME

Julian Bellinger, who took the video, told ABC News he was waiting in line to get on the ride when he was videotaping. "A piece had fell...When I just seen the people fall out, I turned my head, I couldn't watch," he said.

Ohio Gov. John Kasich shut down all rides at the state fair and ordered them inspected again. He said it was too early to say whether inspectors missed something that led to the tragedy Wednesday night.

"It's a nightmare. It's a terrible situation," he said.

Video taken by a bystander of the swinging, spinning Fire Ball ride in action captured a crashing sound. A section holding four riders came apart, and screams could be heard as at least two people were ejected and plunged toward the ground. Other riders were still in their seats as they fell.

Tyler Jarrell, 18, of Columbus, was thrown about 50 feet and pronounced dead on the midway. The Marine Corps and school officials said Jarrell enlisted last week and was going to begin basic training next summer after his high school graduation.

"That was just this past Friday. Then he goes to the state fair and he is involved in this horrible tragedy. It's just devastating," said Capt. Gerard Lennon Jr., a naval science instructor in the Junior ROTC program at Jarrell's high school.

The injured ranged in age from 14 to 42. At least two were listed in critical condition. Some people were hit by debris.

Jarrell's girlfriend was among those seriously injured, her mother told The Columbus Dispatch. Keziah Lewis, a University of Cincinnati student, doesn't remember the accident and has pelvis, ankle and rib injuries, Clarissa Williams said.

"She kept asking for her boyfriend," Williams said. "I had to tell her he was the one who was deceased."

Kaylie Bellomy was in the next group waiting to board the Fire Ball.

"It was going for a minute and it was at its highest point and I saw somebody fall on the ride, and then a minute later the whole like row of seats fell off and hit the ground," Bellomy told WCMH-TV.

She said it was chaos afterward: "Everybody was running. I got ran over trying to get out of the way."

Records show that inspections on Fire Ball were up to date and a state permit was issued for the ride on Wednesday, the fair's opening day.

All rides at the fair are checked several times when they are being set up to ensure the work is done the way the manufacturer intended, said Agriculture Director David Daniels.

Michael Vartorella, Ohio's chief inspector of amusement ride safety, said the Fire Ball was inspected three or four times before the fair opened. He said that some work on all the rides was delayed by heavy rains last week but that the inspections were completed and not rushed.

Col. Paul Pride of the State Highway Patrol said inspectors are "basically going to do an autopsy on that machine" to figure out why it malfunctioned.

"I can't tell you with a matter of certainty how many days or weeks this will take," he said.

Amusements of America, the company that provides rides to the state fair, said it is committed to working with investigators to determine the cause. It said Fire Ball had been checked by its staff and independent inspectors before the fair opened.

Fire Ball swings 24 riders back and forth like a pendulum 40 feet above the ground while they sit in four-seat carriages that spin at 13 revolutions a minute, according to the company's website.

The ride's manufacturer, KMG, said the one at the Ohio fair was built in 1998 in the Netherlands. Forty-three of the rides, also known as the Afterburner, are in use around the world, 11 of them in the U.S., according to KMG. None has had a serious malfunction before, the company said in an email to the AP.

After the accident, fairs in California, New Jersey and Canada shut down similar rides before the company issued its order.

The U.S. Consumer Product Safety Commission is also investigating. It estimates there were 30,900 injuries associated with amusement attractions last year that required an emergency room visit.

It said there have been at least 22 deaths associated with amusement attractions in the U.S. since 2010.

The Ohio State Fair, which remained open Thursday, is one of the biggest state fairs in the U.S. It drew 900,000 people last year.

"Our hearts are heavy for the families of those involved in last night's tragic accident," fair officials said on Twitter.