ST. PETE BEACH, Fla. - Whether it's fried, grilled, or blackened, the grouper sandwich and a day at the beach are a true match made in heaven. Shells Seafood restaurant in St. Pete beach serves up a ton of the Tampa Bay staple.

"We will go through hundreds of pounds of grouper in a week," says owner John Christen.

Grouper wasn't exactly what they call a "trash-fish," but not far off. It received its first push towards popularity in March 1917, on the eve of the United States entering World War I.

"One of the popular slogans was food will win the war," says Mormino. Concerns over possible food shortages called for people to eat less meat and wheat. Tampa Bay residents were urged to eat more fish. 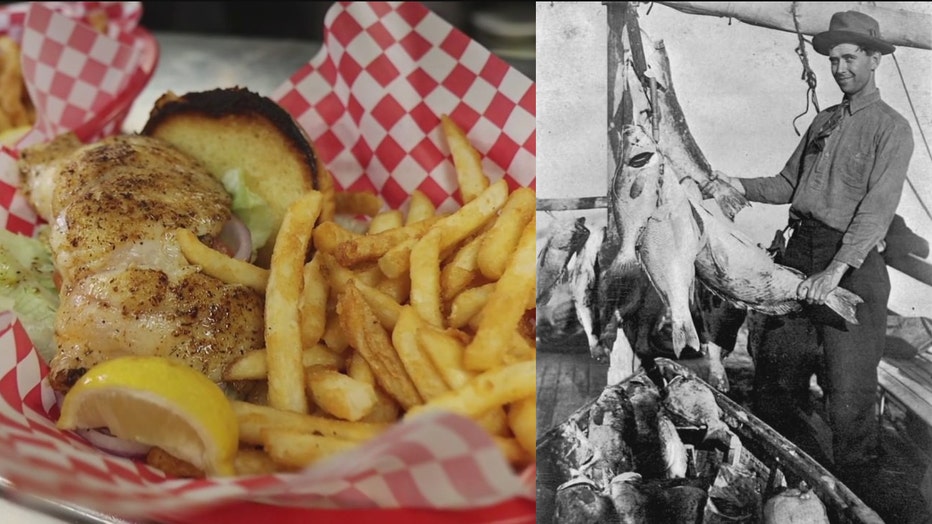 "In fact, they even suggested a recipe. How many newspaper editorials are pitching a recipe? It was grouper and grits," says Mormino. He says it was an idea that was doomed to fail.  "It suggests that St. Petersburg is a southern city. St. Petersburg is about as southern as the Jersey shore."

People weren't hooked, as evident in the food lines of the Great Depression in the 1930s. Gary says they were giving away five-to-ten-pound slabs of grouper, which suggests that it was not a very premium fish.

So, when did grouper catch on in Tampa Bay? Gary says former Ybor City fish market owner, Buster Agliano told him he deserved credit. In the 1960s, A Tampa Tribune writer came to Buster asking for an alternative to the high-priced popular fish of the time, like pompano and king fish.

Not long after, fried grouper began showing up on menus across the region.

"Its popularity, beginning in the 70s, was because it was cheap, prolific and abundant," says Mormino.

The rags-to-riches story of the fish became front page news in 2008, when a large investigation found phony grouper being sold statewide.

"By the 21st century it’s so desirable that we are serving faux grouper to unsuspecting consumers," says Mormino.

Just how long will grouper's reign as fish sandwich king last? Mormino says cost, sustainability and climate change could all play a role in the future of grouper. He says he wouldn't be surprised to see its popularity trend downwards in years to come.