TAMPA, Fla. - Florida Attorney General Ashley Moody has drawn national attention for leading and joining a series of lawsuits against the Biden administration, including a challenge of the 2020 election results.

Now three Democrats are competing in Florida’s August 23 primary for the chance to challenge Moody in November’s midterm election.

Daniel Uhlfelder is an attorney who lives in Santa Rosa Beach. He drew national attention during the pandemic by dressing as the Grim Reaper to protest Governor Ron DeSantis’ policies.

FOX 13 Political Editor Craig Patrick began the interview by asking Uhlfelder if he might continue to wear the Grim Reaper costume if elected attorney general.

Protesting as the Grim Reaper

Craig Patrick: "If you win the race for attorney general, would you rule out wearing such a costume and that capacity, or might you consider wearing it to something like a cabinet meeting if you wanted to protest the actions of the governor and fellow cabinet members, yet again (if they advanced policies that deeply concerned you, yet again)?" 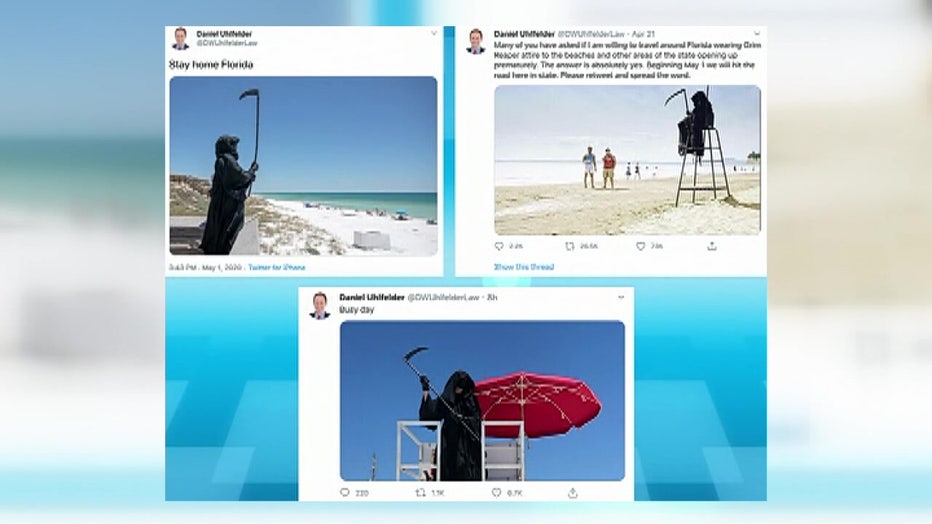 Daniel Uhlfelder: "Well, let me correct you. It’s ‘When I win this race. So, when I win this race, you know, I haven't thought about that… The costume has been memorialized in a museum in Miami. I think what my protest and my activities showed back when I did that was that I was willing to take action that to bring attention to things. So, you know, I wouldn't rule it out. I think that hopefully we won't have a Governor DeSantis in office, and we'll have somebody like Charlie Crist or Nikki Fried, who I believe would do a much better job than Governor DeSantis. But if Ron DeSantis gets reelected when I'm attorney general, you know, I guess all bets are off. Let's just say that."

As Florida beaches began to reopen in May 2020 during the first months of the pandemic, lawyer Daniel Uhlfelder dressed as the Grim Reaper to protest the move and urge people to avoid large crowds.

Jim Lewis is a former state prosecutor who currently works in ft. Lauderdale as a criminal defense attorney. He is one of three Democrats competing in the August 23 Democratic Primary for the chance to challenge Attorney General Ashley Moody in November.

Daniel Uhlfelder: "Absolutely! Donald Trump is a criminal. Every day he commits another crime. It's disgusting that we have allowed him to walk free. Donald Trump has manipulated and corrupted the system and instigated insurrection with the hate of many people. He's from what I understand… he took the Fifth Amendment 400 times in his deposition in New York with the attorney general there, when he said that anyone takes the Fifth Amendment is clearly guilty. So, Donald Trump, if he wants to stay in Florida, when I'm attorney general at Mar-a-Lago, that crime scene that is down there, I'm going to investigate it for sure."

Craig Patrick: "Would you refuse to prosecute women who have abortions or those who perform them based on the timing of the procedure, if it violates state law?

Daniel Uhlfelder: "As I said early on, when the Dobbs decision was first leaked before, it came out, I said I would not use the resources of the attorney general to prosecute women or doctors that are involved in that procedure, that Florida has a right to privacy in our Constitution. We've had it since 1980. The right to privacy has been recognized to apply to reproductive rights, to abortion rights numerous times. So, I do not believe that any of these restrictions that are these government overreaches are compliant with our Florida Constitution."

Craig Patrick: "Knowing what you know of Governor DeSantis, do you think he might try to argue that refusing to prosecute people for performing or receiving abortions in violation of state law would be a neglect of duty? Or is it possible that he could try to construct that kind of argument?"

Daniel Uhlfelder: "I wouldn't put anything past Ron DeSantis. Ron DeSantis is a autocrat. All he wants to get is more power. He goes after people that he disagrees with, whether it's Disney, whether it's reporters, whether it's anything. So, he is not a law and order governor is a tyrant."

Craig Patrick: "Based on what you've seen in the Hillsborough office of state attorney and elsewhere, then if you are elected and if he wins reelection, do you think he might suspend you? And if so, what would you do?"

Daniel Uhlfelder: "He has no right to suspend another member of the cabinet, that attorney general and third in line to run this state. He has no authority to do anything of that nature."

Craig Patrick: "Did he have the authority to suspend Andrew Warren?"

Daniel Uhlfelder: "I don't think so."

Daniel Uhlfelder: "Yes. I mean, when I'm attorney general of Florida, I'm going to be representing 22 million Floridians, whether they're Democrat or Republican, independent. And yes, I will vigorously defend actions. Of course, if there are things that I think I could stave off before they go into effect, I would do that. But the attorney general, the Florida state law is supposed to be a nonpartisan position. We've had great attorney generals in the state like Bob Butterworth, who's supporting me, like Bob Shevin, you know, like Charlie Crist. You know, so we don't have the attorney general is an attorney. It's not supposed to be a politician. Like I hear now, I practice cases. I litigate my cases based on the facts and the law, not based on politics. Our current attorney general, Ashley Moody, is doing the exact opposite. She signed on to a brief to overturn a valid election. She stood in the way of two initiatives being on the ballot to legalize marijuana. She stood in the way of the Affordable Care Act." 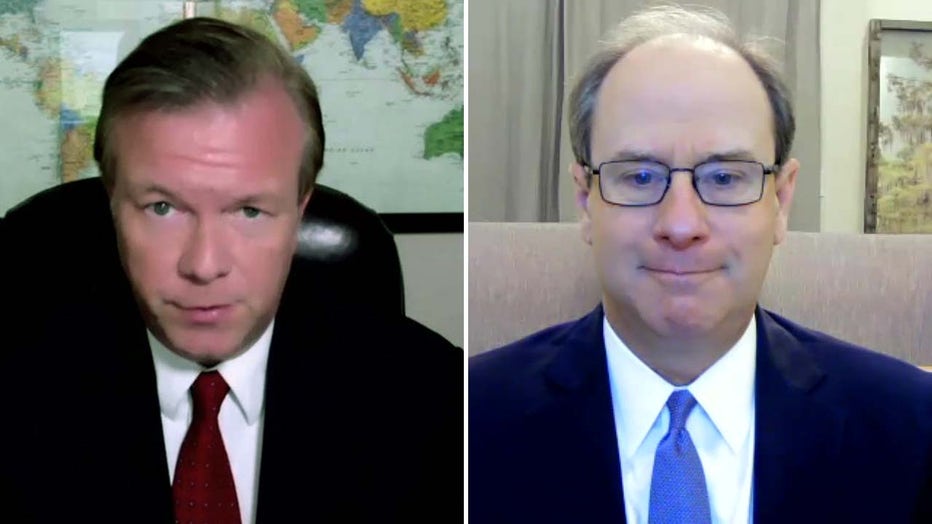 Daniel Uhlfelder: "I was a Democrat growing up. My parents have been Democratic activists. I worked for Bill Clinton, Lawton Chiles, Bob Graham. I've been and I was a Democrat for most of my life. I moved to this area, and I could not participate in elections in Walton County because I couldn't vote for school board members that were friends of mine because it is all Republican. But then a few years ago, I decided that I could no longer be a member of the party, the Republican Party. I've always been a person that believes in, you know, voting rights, reproductive rights, all sorts of environmental rights. I've been a consistent believer in the principles of the Democratic Party. Just unfortunately, I lived in an area where I vote that I didn't have any voting rights because basically every election, like we have an election here in a week or two for our county commission, there are no Democrats running. But I decided a few years ago that I could no longer do that. And that's who I am. I mean, I was a Democrat most of my life. I was a Republican for a period of time... If you go to my Twitter page, why don't you just go there and you can’t find anyone who's been more aggressively attacking Ron DeSantis, Ashley Moody, Matt Gaetz, Donald Trump. You will not find a person. I started a PAC called Remove Ron to remove the governor. So I understand. And this is going to help me in the general election when I win the primary, because I'm able to communicate with people that may be a member of a different party because I live among people who are a member of a different party."