TAMPA, Fla. - Florida Attorney General Ashley Moody has repeatedly sued the Biden administration – and joined a lawsuit to challenge the results of the 2020 election. Now, three Democrats are competing in the August 23 Democratic Primary for the chance to challenge Moody in November (Aramis Ayala, Jim Lewis and Daniel Uhlfelder).

Jim Lewis is a former state prosecutor who currently works in Ft. Lauderdale as a criminal defense attorney. In his interview with Fox 13 Political Editor Craig Patrick, Lewis described himself as a law and order, moderate Democrat who is running to break the influence of money in politics.

His priorities include advocating for a ban on what he defines as assault weapons. The interview began with a discussion of the challenges Democrats are facing in 2022, and Lewis’ comparatively limited financial campaign resources.

Craig Patrick: "I want to start with an open letter on your website to your fellow Democrats, which begins, We Democrats are in jeopardy of not having a single Democrat elected to statewide office. Republicans have raised millions of special interest dollars to blow us out. And a case in point could be your own campaign finance records that show that you only have roughly $6,000 raised through the first week of August, about $15,000 in loans. Are you at risk yourself of getting blown out if, in fact, you win the nomination?"

Jim Lewis:  "It could happen. But that's the whole reason that I'm running this campaign finance system using PACs and millions of dollars by special interest groups like FPL and Big Sugar. That's why I'm running to be attorney general, to take big money out of politics. I've pledged to only raise and spend $25,000 on this primary. My opponents have $200,000 or $150,000. None of that money is going to make much of a difference in a statewide primary where we think to bring three and four million people are going to vote. But I'm trying to prove a point is that is someone with the right message, someone who has the qualifications can win this powerful position without having to take all that special interest money."

Craig Patrick: "But even if you have the right message, let's say it's the best message in the world. In a state the size of Florida, if you don't have the money to get that message out, people aren't going to hear it, and then you get blown out." 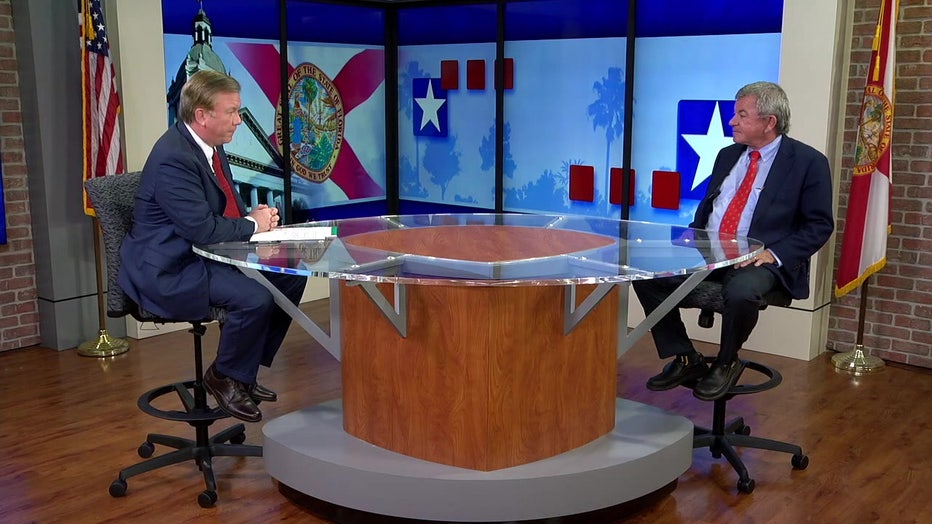 Craig Patrick: "You've run races before. How many times have you run as a candidate?"

Jim Lewis: "I've run nine times. And one who has run more than me is Abraham Lincoln. And it worked out okay for him. My father told me, if your heart is in it and you believe it and you have the will to fight and your heart's in the right place that you do it."

Craig Patrick: "How many times have you won out of those nine?

Jim Lewis: "Not a single one."

Jim Lewis: "Let's hope. Let's hope that people this time are going to hear the message. You know, these are very unusual political times where the two political parties are fighting among each other. And what I'm trying to do is bring people together to solve Florida's problems, like climate change, like crime on the streets. I want Florida to be safe and free."

Craig Patrick: "Let's go back to the letter, which also states, if we are going to win statewide offices in Florida, we, [meaning you, the Democrats], are going to do it with less money and less political organization than the other guys. That is just a fact. Why do you think the Democrats have failed strategically to match up with the Republicans?"

Jim Lewis: "Well, we haven't been able to raise the money, and we haven't got our message out."

Craig Patrick: "Why not?"

Jim Lewis: "Well, Republicans have a lot more money than Democrats politically… They just do. But we have the message. You know, we're right on the gun issue. We want to ban assault rifles…"

Craig Patrick: "Congress banned assault weapons or what it defines as assault weapons once before. But the gun makers found ways to evade the charts and the definitions. And in many respects, that ban did not work as intended. How would a statewide ban you would push for it be different?"

Jim Lewis: "Well, it would work. And that ban did work. And unfortunately, the National Rifle Association, they certainly have found loopholes. But we can craft laws that will get guns, particularly assault rifles, out of civilian hands. We can do that, but we've got to get elected to do that. We have the right message. The people are with us, and we can fight against this money special interest onslaught that the Republicans have. We Democrats, if we can get a couple of positions on the statewide level and start turning that legislature around, we can do things if people give us a chance, we can do things that they want. Republicans want to do what they want to do. They're on some right-wing agenda to change the world. Drive us off a right-wing cliff. Thank goodness there are a couple of Democrats that I'm a moderate Democrat. I'm not a far-left Democrat. You know, I believe in the death penalty. I believe in law and order. I'm the kind of Democrat that can win and hopefully bring this state back to glory days like we had when."

Craig Patrick: "Well, that takes us back to your letter. I want to read another line. It states, 'but fear not Democrats. We can and will win if we appeal to the same people who decide every statewide election in Florida, the people in the middle."

Craig Patrick: "Is it true?"

Craig Patrick: "Okay. So let's say if you win, people who identify as moderates, 58%, would that do the trick?

Craig Patrick: "Well, that's exactly what happened in 2018, according to exit polls with both Senator Nelson and with Andrew Gillum. But what happened is they lost in large part because Democrats in South Florida left them at the altar."

Jim Lewis: "Well, that's true. We didn't turn out we didn't turn out our own vote. And those races were close… So we've got to get our own folks out to vote as well. But we've got to appeal. And I think that's going to happen enough with the taking away a woman's right to choose and not with the gun violence. That's going to turn out a lot of Democrats in the base. But we've got to get those folks in the middle that want law and order but just aren't ready to go off the right-wing nut job that the governor wants us to take."

Craig Patrick: "You are pressing for legislation to reduce gun violence. That is what Florida state leaders did after the Parkland massacre in a number of ways, hardening school security, additional support for mental health services, changing the age for purchasing a rifle, red flag laws. The list goes on and on. Did you support that?"

Jim Lewis: "100%. It was certainly a step, certainly in the right direction, but it's not enough."

Craig Patrick: "What more do you do?"

Jim Lewis: "We take away assault rifles from the civilian population 100%. We melt them down. We don't have them in our community, guns that do nothing but kill people. And we don't use them for hunting. We use them for no good purpose. We've got plenty of guns in the state. We don't need assault rifles."

Craig Patrick: "If elected, you would manage the office of statewide prosecutor. Would you prosecute or decline to prosecute women who obtain abortions and providers who perform them if they violate state law?"

Craig Patrick: "You will still prosecute."

Jim Lewis: "I will follow the law. And if that's the law at that time, I will follow it. I will do it kicking and screaming. And I will look for every reason not to prosecute somebody. But in the bottom of the day, you have to follow the law. I'm not going to put myself above the law if I'm lucky enough to be attorney general.

Craig Patrick: "Do you think Andrew Warren put himself above the law, as the governor contends, or at least was negligent in his duty as a state prosecutor?"

Jim Lewis: "There wasn't a single abortion case that was before him, and that was a total political move by the governor. And it was wrong. They've taken away a great state attorney who was elected here. It was wrong. But, you know, the bottom line is we've got to be smarter as Democrats in terms of, yes, we're going to follow the law, but we're going to also do things to try to change the law and get it back to where it should be."

Craig Patrick: "Had there been a specific case that he declined to prosecute at that point? Do you think the governor would have been right to suspend him?"

Jim Lewis: "The governor should have made it an executive appointment like he did with one of my opponents when she wouldn't support the death penalty. He didn't remove her from office. He simply took those cases away and gave them to another prosecutor. He could have done the very same thing in this case, but instead he took the political move of removing him. And that's just wrong."

Craig Patrick: "Do you think that Governor DeSantis could suspend an attorney general? Does he have the power to do that?"

Jim Lewis: "He does not, because it's a cabinet level position. It would have to be an impeachment proceeding that would go through the Florida Senate. And unfortunately, the Florida Senate right now is very Republican and probably would do what he would want to do. So, yeah, the new attorney general is going to have to pick his words carefully, but also going to have to represent the people of Florida."