Kevin Hayslett -- 1 of 5 Republican candidates running in one of Florida's most competitive Congressional primaries -- is a private attorney former Florida Assistant State Attorney who is branding himself as a political outsider, law and order candidate, and Trump Republican. He hopes to fill the seat in the 13th U.S. House District left vacant by its current holder, Charlie Crist who is running to be the Democratic nominee for governor. The primarily Pinellas County district was recently redrawn by the legislature and Gov. DeSantis to favor Republicans.

ST. PETERSBURG, Fla. - Pinellas County has one of the most competitive congressional primaries in the state. The 13th U.S. House District currently represented by Democrat Charlie Crist has been redrawn by the legislature and Gov. DeSantis to favor Republicans.

Five Republicans are competing for the nomination, and all five agreed to interviews with Fox 13 Political Editor Craig Patrick. Part of his interview with Republican candidate Kevin Hayslett first aired on August 11.

Hayslett is a private attorney and former Florida Assistant State Attorney who is branding himself as a political outsider, law and order candidate, and Trump Republican.

Craig Patrick started the interview by asking why Hayslett is running as a Trump Republican when former President Trump endorsed one of his opponents in the race.

Here is an excerpt from that part of the interview.

Craig Patrick: "How do you square branding yourself as a Trump Republican when he, in fact, is endorsing a rival?"

Kevin Hayslett: "You look at that over the years, historically, you want to define what are your policies, what are your views? We had Reagan Republicans. You could go back and have Lincoln Republicans. You go back to the very beginning of our republic and it tells people, what do you believe in? And I feel very strongly about Trump's policies. And he has been very good on border security, for example. He's very strong on the military. The way that he approached this country in leadership, we didn't have problems in Ukraine when he was president. We didn't have problems out of North Korea. We didn't have problems in Taiwan. I wanted people to understand the policies that I would bring to the table, that brand of Republican, and he sort of set the mark on what that Republican looks like."

Craig Patrick: "Why then did the former president himself not embrace you as a candidate?"

Kevin Hayslett: "Well, that's a great question, because unfortunately, all that occurred before I was in the race."

At this point in the interview, Craig Patrick pointed out a screen grab of a Facebook post that has surfaced in the race, in which Hayslett appears to criticize Trump in October 2016. He asked Hayslett if the post is authentic or fake. Hayslett said he had not seen the post, and noting the date contained within the post, he said he doesn’t know what was written then and written now. 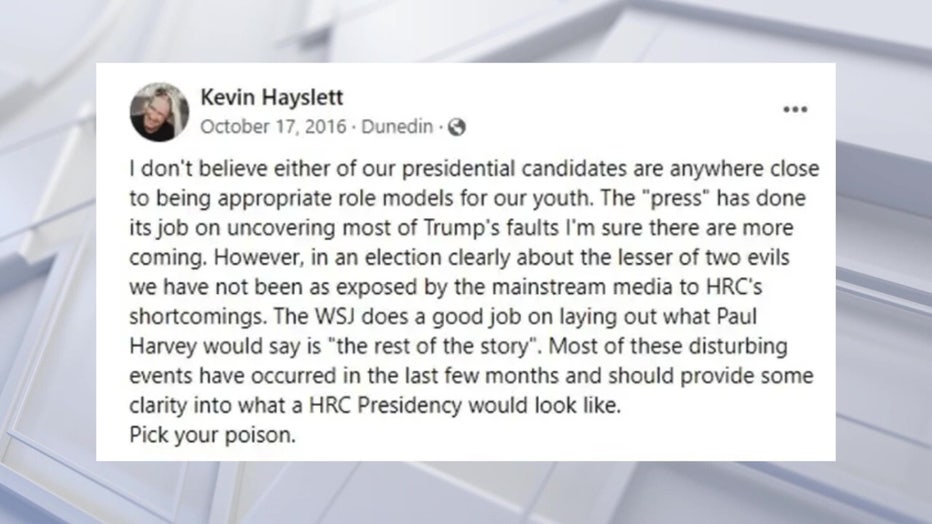 Kevin Hayslett: "All I can tell you is where we're sitting right now, which is we're in a position where this country is going the wrong direction."

A key point of Hayslett’s platform is controlling inflation and has Tweeted his assertion that the U.S. economy is in recession. Craig noted the U.S. is not conclusively in a recession, especially in light of the report showing the U.S. economy added 528,000 jobs in July. This led to a discussion of recession versus inflation, and how Hayslett would address the inflation crisis if elected. 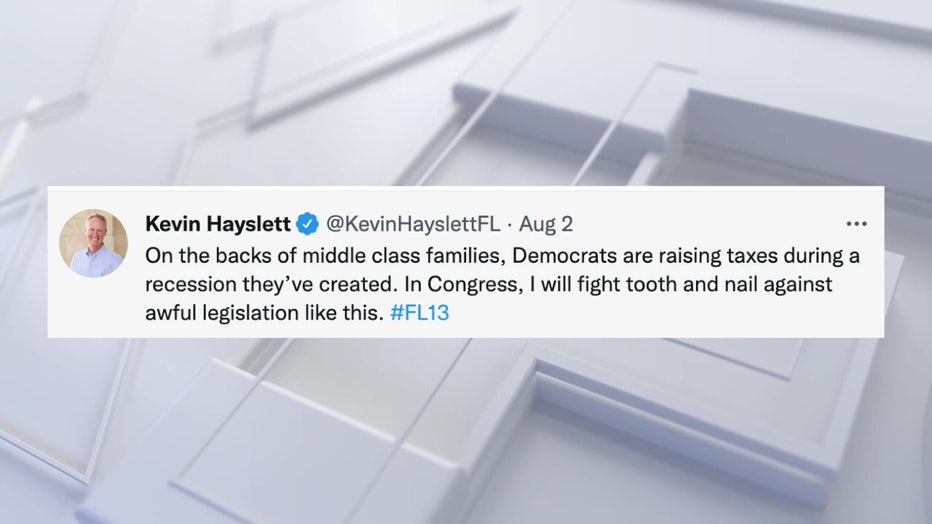 Social media post by Kevin Hayslett on August 2, 2022, criticizing Democrats for "raising taxes during a recession they created"

Here is an excerpt from this exchange:

Craig Patrick: "We have an acute inflation crisis, but that's because the economy has been overheated. We're not in a recession when you have 528,000 new jobs created?"

Kevin Hayslett: "Those were people that were sitting on their couch. They're now getting back. These are not new jobs that are being created and I understand that argument. That's a fallacy and that's how you describe it. You want to put lipstick on a pig? That's what you're doing. These are not situations that are real jobs being created. These are folks that were, that didn't have work. They have sat and sat on the government dole. Listen, we can't give money to people forever without consequence. We can't. We've got to stop the printing presses. Listen, I've run a business. I understand what it's like. I've had to look employees in the eye and with my partner say, listen, we're not going to get paid this month because we're going to pay our employees. And they're hurting. They're hurting."

Craig Patrick: "So paying down the national debt, reducing the deficit, certainly that relieves borrowing pressure. That would be a step in the right direction. Is there anything else in terms of a legislative proposal or a bill that you would push forward if elected to control inflation?"

Kevin Hayslett: "Absolutely. We've got to shrink the federal government. You look over the past ten years, the federal government has expanded beyond the rate of people coming into this country. Based upon our population versus what we've added to the federal government. We have to go the other way. Listen, we can't create this behemoth federal government that keeps getting larger and larger. We can't afford to feed the beast. Remember, it's not the government's money. It's our money. It's your money. It's the people that watch this show, this program. It's their money. And what we need to do is be more fiscally responsible. You've got families that sit around a kitchen table that divide up that pot. And the problem is they're buying power is less. It's less because of inflation. It's less because of gas prices. It's less because of the cost of goods. This is a problem. And under Trump, we didn't have those issues. No one was invading Ukraine. No one has rattled the sabers on Taiwan. Those have come under Biden. And quite frankly, I talk to people on the streets every day. They believe the country is going in the wrong direction. They want people that are business minded, who built a business—people who were successful at something before they went into politics. They want non-politicians like myself who've not done this, who, quite frankly, I don't want to do this, but I was sick and tired. I sat on my couch and said, ‘Listen, no one is stepping forward who has any experience to do the job, who understands the district? That's why I got in the race.’"

Craig Patrick: "If the bill comes up, would you vote for or against legislation that writes protection for same-sex marriage and the federal law?"

Kevin Hayslett: "Well, you're talking about, you know, you want to rewrite what happened in the Dobbs decision."

Craig Patrick: "It's in response to that ruling to codify it into law. Did you vote for it again?"

Kevin Hayslett: "The Supreme Court just told every member of Congress and the citizens that those issues are states-rights issues."

Craig Patrick: "Logically, that means you would vote no."