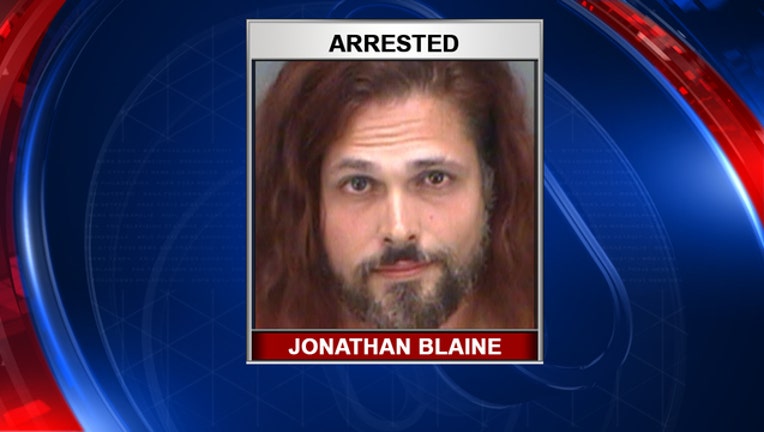 PALM HARBOR, Fla. (FOX 13) - A Palm Harbor man was arrested after threatening to stab and shoot employees at a pet store, deputies said.

Witnesses added that his behavior escalated and employees asked surrounding customers to move to the back of the store as a precaution, deputies said.

Blaine left the store, but 30 minutes later the Pet Supermarket manager received a phone call from the corporate office. Apparently, Blaine called customer service and threatened to stab or shoot someone at the business, deputies said. He claimed that if it wasn’t for his girlfriend, he would’ve followed through with the threat, officials added.

The incident was reported to the sheriff’s office. Deputies arrived at the pet store after 6 p.m. and were told by the store manager that she closed the business due to the verbal threats.

Deputies said they found Blaine at his Palm Harbor home where he admitted to the allegations, but denied owning any weapons. Deputies said they took a handgun found at the home. The handgun belonged to Blaine’s live-in girlfriend.

Blaine was arrested for making a false report.

Investigators said this wasn’t the first time he made a threat. Earlier this year, deputies said Blaine was investigated by the Secret Service after calling the U.S. Department of State in reference to President Donald Trump and threatened Congress. Detectives said he was upset about the length of time it was taking to resolve his passport issues.

They said, at the time, Blaine stated he was joking.