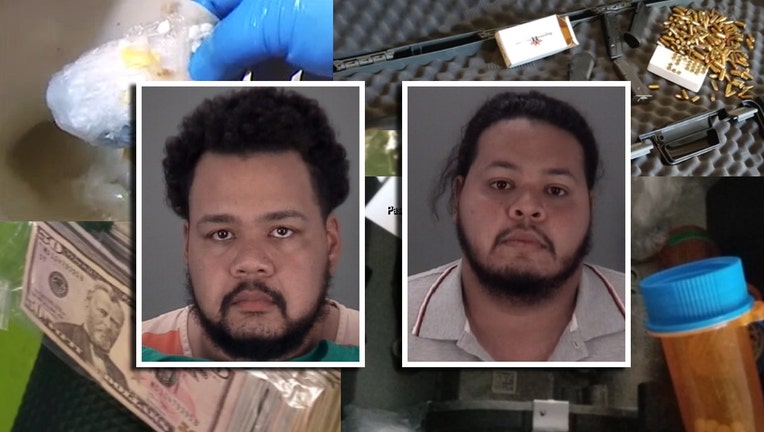 Marco and Fernando Maysonet were arrested in Pasco County on drug and money laundering charges.

Investigators say Marco and Fernando Maysonet trafficked opioids up and down U.S. 19, profiting off of customers' addictions.

"This includes prescription pills, this included heroin, this included fentanyl," said Capt. Mike Jenkins. "They could not care less about the devastating consequences that the citizens of Pasco County are experiencing as a result."

With the cash they made, investigators say Fernando Maysonet deposited more than $300,000, over three years, into his bank account; deposits that included rent payments from properties likely bought with drug money, according to investigators.

That all came to an end after a nearly year-long investigation. Deputies arrested the brothers last Friday, seizing a total of $400,000 in cash, firearms, and drugs. It's a major battle won in an ongoing war.

"We realize at the Pasco County Sheriff's Office that we cannot arrest our way out of this problem. It really is a supply and demand issue," Jenkins said.

At the height of the opioid epidemic in 2011, Jenkins said Pasco County reported 165 overdose deaths. The problem resurfaced again in 2017.

Capt. Jenkins predicts the number of overdose deaths for 2019 will exceed the 2011 total. The number would rise even higher if it weren't for the agency's deployment of Narcan, which began in 2017.

"We are seeing more and more commonly that someone is being recognized for saving someone's life through the deployment of Narcan," Jenkins said.

The Maysonets' arrests are part of many efforts to hold accountable those who supply the demand.

"Not only will we identify you and hold you accountable and put you in jail, we will seize all of the property and all of the goods and all of the items you have purchased directly with those ill-gotten gains," Jenkins said.

The sheriff's office plans to use funds seized in the bust to buy equipment and technology to help Pasco continue the fight against drugs.

Fernando Maysonet faces money laundering and drug charges while Marco Maysonet, a felon, is facing a slew of gun and drug charges. Investigators say two other people related to the brothers overdosed and lived, which means additional attempted homicide charges could be coming.