Thousands without power after Hurricane Ian

ST. PETERSBURG, Fla. - Tens of thousands of people were still without power Thursday night after Hurricane Ian swept across the Sunshine State on Wednesday.

Duke Energy says the lights should be back on for most customers in Pinellas County by 11:59 p.m. Saturday.

Utility crews are working around the clock to restore service as quickly as possible, and people are coping as best they can.

"Here’s our fridge, no light but it’s still cool in there," said Jen Sharp.

RELATED: Parts of Wauchula underwater in aftermath of Hurricane Ian

The St. Petersburg woman knew losing power was a possibility, so she had a stockpile of ice ready before Hurricane Ian hit.  The storm knocked out the electricity around 6 p.m. on Wednesday. Sharp says day one has not been too bad.

"We made some food on the skillet with the gas stove, and we just watched some shows that we downloaded," she said. 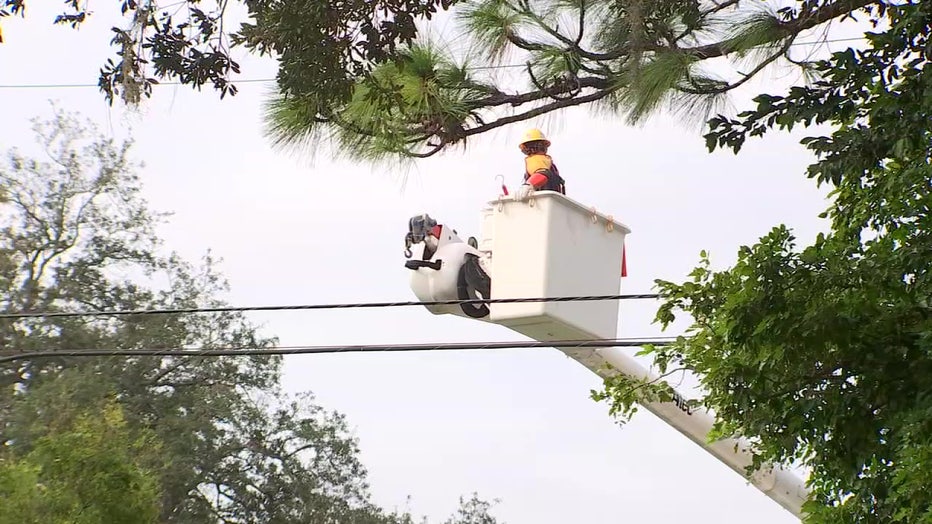 Crews work to restore power to tens of thousands of Pinellas County residents living without power after Hurricane Ian.

The windows are open to take advantage of the breeze and lower temperatures, and a battery-operated fan helps keep the air moving in the historic Kenwood home.

"It’s not humid at all, which is I didn't expect that, so I feel very grateful compared to how bad it could have been for sure," shared Jess Resch.

Flipping switches out of habit might be annoying, but having to miss work is an inconvenience.

"I work from home and I’d like to be working today, but I just don't have the internet or the power, obviously," explained Resch.  "So that's been the biggest challenge is not being able to work."

Parts of the power grid in Lee and Collier Counties will need to be rebuilt, but in the Bay Area power should be restored within a few days.

In this neighborhood, people are looking out for each other.  One generator is keeping the lights on at two houses on the same block, sharing electricity so they can power essentials for their families.

"It’s just everybody pulling together, everyone asking if everyone’s okay, and I got to say the neighborhood is fantastic for the comradery and the help, without even asking for it people are calling up and asking if you need anything, if everything is okay," shared Danny Lister.

Kerosene lanterns help after the sun goes down, however, it can be a challenge keeping your electronics and phone charged, and all of your clocks may be electric.  It is all the little details of life a prolonged power outage interrupts.  Things you take for granted.

"There's so many little tiny things that you rely on that just aren't there anymore, like the bathroom light," Lister said.