LAKELAND, Fla. - Polk County Sheriff Grady Judd is advocating that every school have more than one armed person on campus in case an active shooter shows up.

In the wake of the Parkland massacre, Judd was the driving force behind "The Guardian Program," which mandates that at least one armed officer or properly trained private citizen be stationed at every school in the state.

Judd, who is on the commission investigating the Marjory Stoneman Douglas High School shootings, spoke to dozens of community leaders about how the system in Parkland failed from the very start. 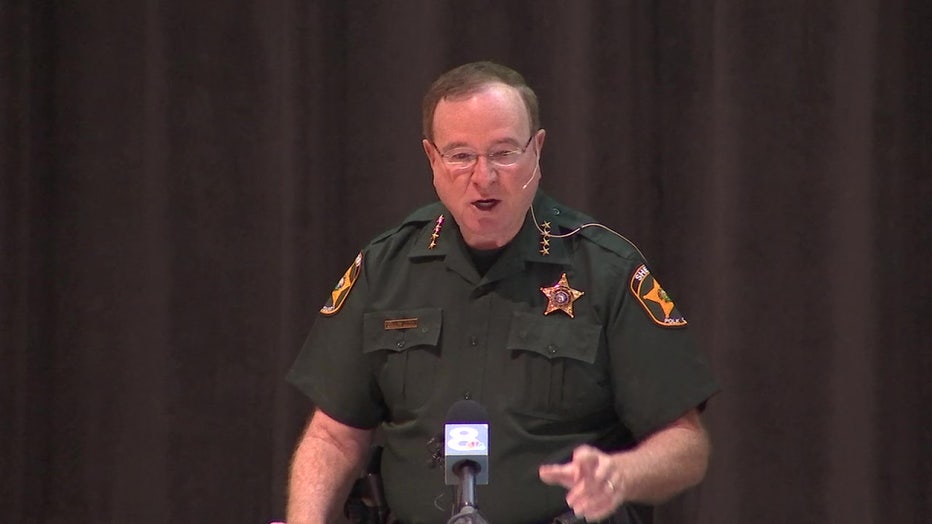 Polk County Sheriff Grady Judd is advocating that every school have more than one armed person on campus in case an active shooter shows up.

Nikolas Cruz, who has been sentenced to life in prison, shot 34 people, many of them students, on Valentine’s Day 2018, killing 17.

Judd criticized the events that led up to the shooting as a complete failure of the system.

Cruz, who was identified as having psychological problems from an early age, never got the effective therapy he needed, according to Judd.

'I saw you enjoying it': Parkland father watched video of Cruz's massacre, blasts defense for saying they 'endured' attacks from victims' families

Fred Guttenberg, the father of 14-year-old Parkland victim Jaime Guttenberg, said he watched footage of Nikolas Cruz's massacre inside the school and saw him 'enjoy' killing 17 people, including his daughter. He lamented how he and other victims' families will never see their children get married, then blasted the defense attorneys for their objections in Tuesday's hearing, where they claimed they had to 'endure' attacks from the grieving families.

On the day of the massacre, the Uber driver who brought the then 19-year-old back to his alma mater with an AK rifle never said anything.

The front door of the school was unlocked, so Cruz just strolled in.

Judd says Cruz was known for antisocial behavior when he was a student there. Despite that, two staffers who saw him carrying a gun bag didn’t report it.

Polk County Sheriff Grady Judd, who served on the Marjory Stoneman Douglas Safety Commission, addressed the verdict in the Parkland school shooter trial, blasting the jury's decision to reject the death penalty and instead sentence Nikolas Cruz to life in prison.

A responding law enforcement officer, who according to Judd, should have been wearing his vest, wasted time as he fumbled around putting it on after he arrived.

No matter what law enforcement agencies say to the contrary, Judd says officers are usually going to arrive when most of the damage is done.

So, schools have to be the first line of defense and need more armed people already on campus.