TAMPA, Fla. - Timing is everything for the players in the Super Bowl and also the pilots who will converge for the military flyover at Raymond James Stadium in Tampa.

"As you can imagine, when you get the opportunity to fly over the Super Bowl, there’s no shortage of volunteers," said Lt. Col. Christopher McAlear, the chief of aerial events for the U.S. Air Force.

McAlear has directed nearly 100 different flyovers and exhibitions. But the flyover for Super Bowl LV in Tampa will be unique, a rare formation of three of America’s front-line bombers, the B-1B, the B-2 Spirit stealth bomber, and the latest generation of the iconic B-52.

"All three of these put together really represent our nation’s front line of deterrents to our enemies," McAlear explained.

The flyover for Super Bowl LV in Tampa will be a loud one. The U.S. Air Force’s three primary bombers will fly low and slow over Raymond James Stadium as the national anthem wraps up.

They’re points of pride for friends who flew them.

Stephenson was in B-52’s over Vietnam and is the president of the B-52 Stratofortress Association. He says modernized B-52’s will continue to fly for decades, and he looks forward to the Super Bowl flyover.

Tampa has a bomber connection. MacDill Air Force Base was an important training base in World War II and the 1956 movie 'Strategic Air Command,' starring Jimmy Stewart, was filmed at MacDill.

Aviators from MacDill will have a role on Super Bowl weekend.

"We’re going to get the tankers from MacDill airborne and let our crews practice aerial refueling," McAlear said. 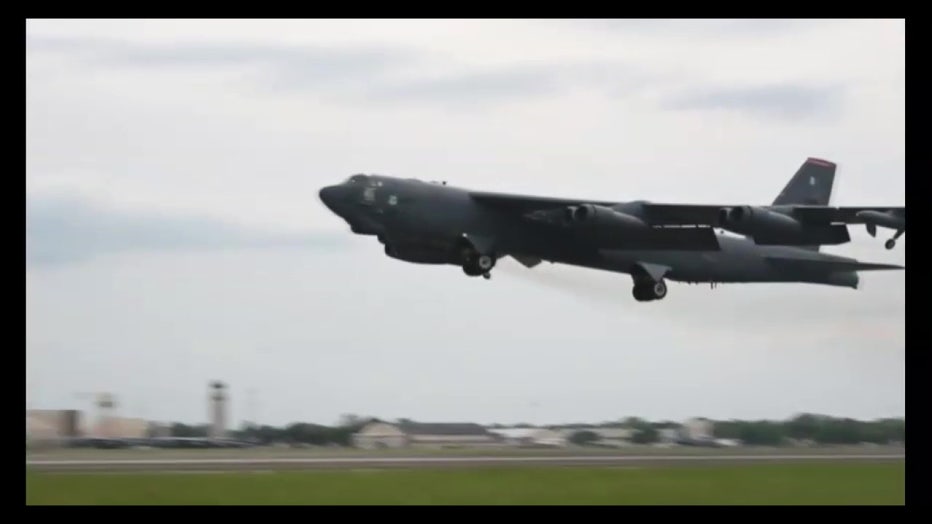 Still, the end game is the big game when the flight crews of the three bombers close in on the stadium, the crowd, and the cameras.

McAlear said, "And then they will use the pressure of performing in front of millions of people worldwide to make sure they hit that last note, ‘Home of the Brave,’ and they’re overhead. No pressure, right?"

Timing is everything for the three famous planes assigned to Mission Super Bowl. They’ll head straight back to their bases in North Dakota, South Dakota, and Missouri following the flyover.