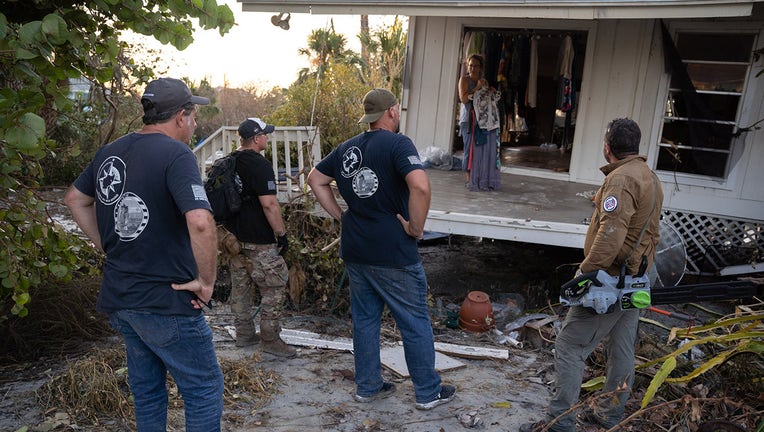 Members of the Project DYNAMO rescue organization talk with a resident in a storm damaged home in the wake of Hurricane Ian on October 1, 2022 on Sanibel Island, Florida. (Photo by Sean Rayford/Getty Images)

SANIBEL ISLAND, Fla. - There was no time to waste. As Hurricane Ian lashed southwest Florida, Bryan Stern, a veteran of the U.S. military, and others began gathering crews, boats and even crowbars for the urgent task that would soon be at hand: rescuing hundreds of people who might get trapped by floodwaters.

"As soon as the sun came up, we started rolling," said Stern, who last year put together a search-and-rescue team called Project Dynamo, which has undertaken operations in Afghanistan, Ukraine and, now, Florida.

Project Dynamo has rescued more than 20 people, many of them elderly residents who became cut off when the Category 4 storm washed away a bridge connecting the Florida mainland with Sanibel Island, a crescent-shaped sliver of shell-strewn sand popular with tourists that is home to about 7,000 residents.

On a stretch of beach, etched into the sand, there were calls for immediate assistance: "Help," "SOS."

As local authorities continue reaching people isolated on barrier islands or trapped by floodwaters, others unwilling to be bystanders have sprung into action, sometimes risking their own safety or setting aside their own losses and travails to aid official rescue operations. It isn't a new phenomenon: Grassroots rescue groups have responded to past disasters, including after Hurricane Ida pounded Louisiana last year.

Although some officials frown on people running their own rescue operations — especially in the early going if it's not safe enough yet or if the rescuers lack training — others welcome every bit of help. 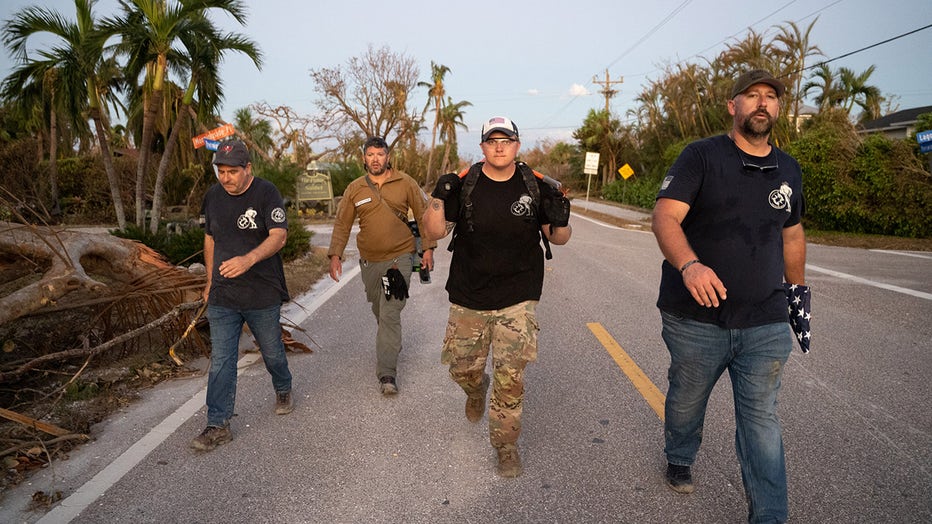 James Judge, right, Alexander Toal, Bryan Stern, and Dean Calderone, left, of the Project DYNAMO rescue organization, walk down a street on a mission to find a missing person in wake of Hurricane Ian on October 1, 2022 on Sanibel Island, Florida. (Ph

"It sort of restores your view of humanity. You see people chipping in and they aren’t getting paid for it," said Tim Barrett, the training division chief for the Sanibel Fire Department. "There’s even people whose homes are destroyed, but they’re helping them. They’re still helping other people."

It can be dangerous work. Hundreds of buildings were destroyed by the ferocious storm, which lashed some areas with winds of 155 mph (249 kph) or more and pummeled the coast with ocean surge.

"But I’ve been talking to the sheriffs and first responders and they’re trying to get to these people as quickly as they can.," he said. "They’ve been working to evacuate people that stayed on, places like Sanibel and Pine Island and Fort Myers Beach."

RELATED: Biden to survey hurricane damage in Puerto Rico ahead of Florida visit

The storm has killed dozens of people in Florida and more bodies might still be recovered.

Matt Mengel and his friends said they had made seven rescues so far, most of them elderly residents of Sanibel Island whom they reached on jet skis.

"We had gasoline. We had jet skis. We had water. We had food and snacks. And our mission was just to go find them, dead or alive," he said. 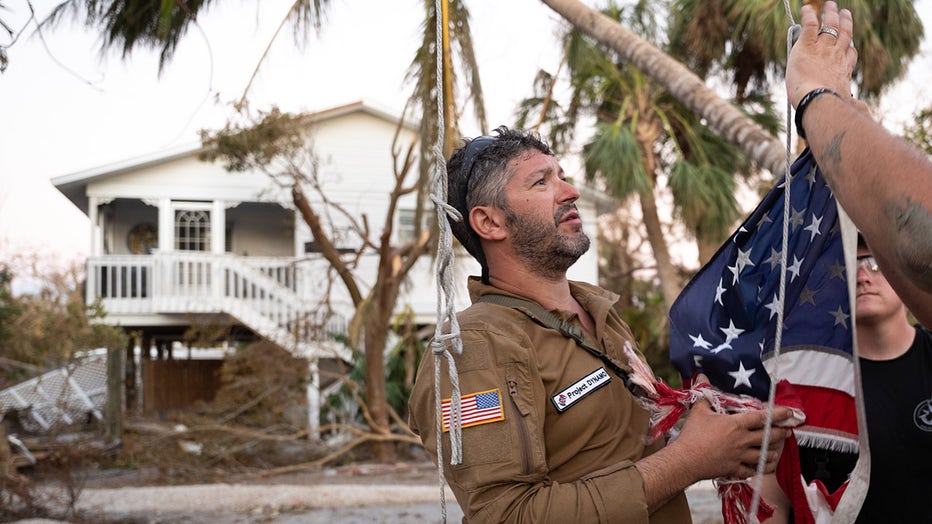 Bryan Stern, founder of the Project DYNAMO organization, rescues an American flag in the wake of Hurricane Ian on October 1, 2022 on Sanibel Island, Florida. (Photo by Sean Rayford/Getty Images)

He called the destruction of the area, where he has lived for seven years, heartbreaking. "It was sad to see our home get destroyed and our favorite spots get destroyed."

The group's rescue missions began Friday when they hadn't heard from a friend who lives and works on Sanibel Island. That friend was found safe and sound, but they quickly found others who needed help.

Just as they were leaving, Mengel's girlfriend heard a woman calling out for help. They responded and found a couple who desperately wanted to leave the island.

A Coast Guard helicopter was patrolling nearby, and Mengel — with the help of the Project Dynamo crew — began frantically waving for attention. The helicopter spotted him and touched down on the beach to whisk the couple away.

"All I wanted to do was help," Mengel said. 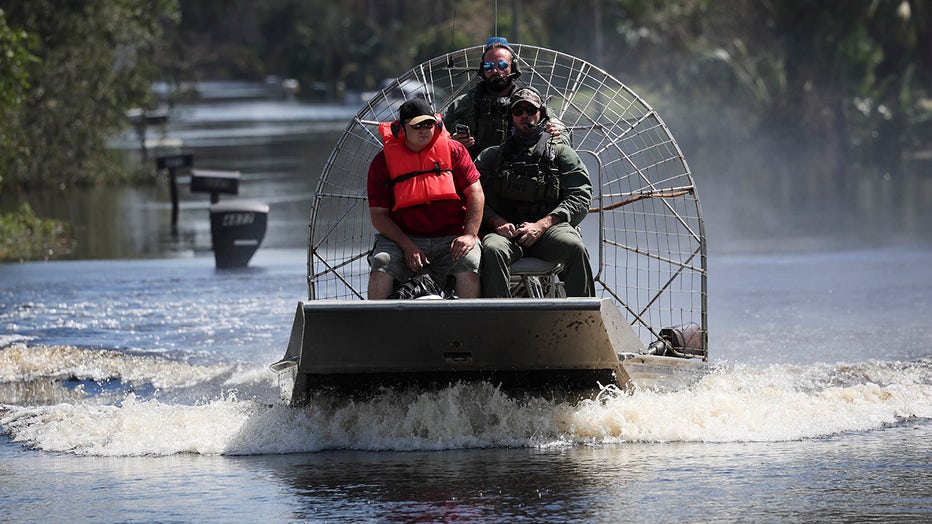 A rescue team evacuates a resident in a neighborhood flooded by the rising Myakka River in the wake of Hurricane Ian on October 01, 2022 in North Port, Florida. (Photo by Win McNamee/Getty Images)

A local television station recounted how three siblings — Leah, Evan and Jayden Wickert — helped save about 30 people from rising floodwaters in a Naples neighborhood.

Water had deepened to about 6 feet (nearly 2 meters) in their neighborhood, and folks were standing on whatever they could to keep their necks above water. The siblings used kayaks and boats to save people.

"There were a lot of people standing on their couches getting out of the water," Leah Wickert told WBBH-TV. 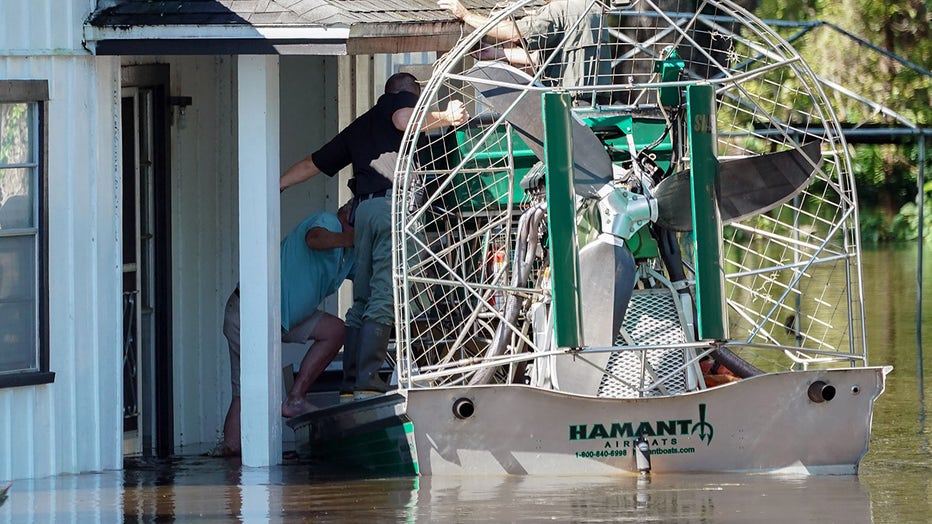 Betty Reynolds, 73, expressed appreciation for the men who came to her rescue after she spent days in her damaged Sanibel Island home.

"You hate to leave a home you've lived in for 47 years," she said, but said it filled with "lots and lots of mud."

She said she didn't evacuate before the storm because she and her home survived previous storms unscathed. But she said this one took her by surprise: "I just didn't believe there was going to be so much storm surge."

Reynolds was taken off the island Saturday while Stern and his Project Dynamo team were on another mission, having received a text from a man who was concerned about his mother.

Stern, whose cohorts are also military veterans, speaks quickly and is full of bravado. On a recent trip to Sanibel Island, he landed a boat directly on the beach, jumped into the water as it hit the sand and ran ashore.

SkyFOX Drone captured video of an alligator that emerged from the flood waters in Orlando left behind by Hurricane Ian.

When there was no answer at the home of the woman whose son had texted, his team used a crowbar to enter, with the son's permission.

Stern said he couldn't stand by. His rescue project was borne out of his frustrations watching Americans and their allies struggle last year to get out of Afghanistan.

He has since turned his attention to helping people flee the war in Ukraine, where Stern and his team plan to return soon after what he called a brief "vacation" in Florida.