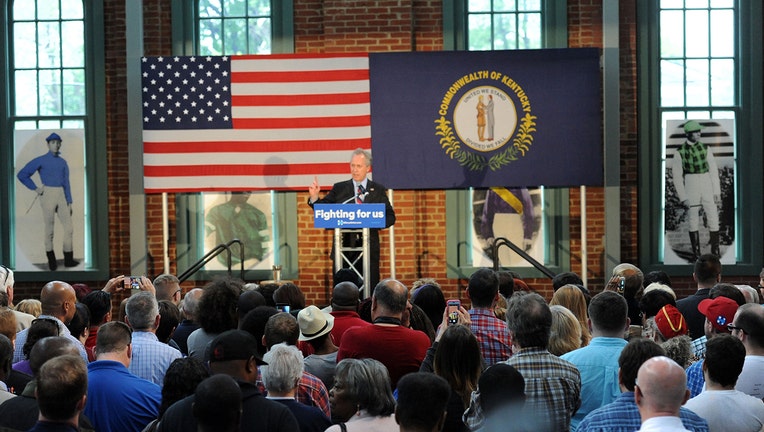 “As mayor and just as an American and a human being, this racism sickens me,” Fischer said in a virtual news conference on Tuesday. “This order lays out in stark terms the societal, economic, physical and mental health impacts of racism on not just Black Louisville, but all the people of our city."

Two police officers were shot in Louisville as protests erupted in the Kentucky city and other demonstrations were planned in cities across the country in response to a Kentucky grand jury’s decision to not indict police officers on criminal charges directly related to Breonna Taylor’s death.

Fischer stated that there are too many gaps that remain in the city, saying that the Black poverty rate in Louisville is nearly three times the White poverty rate.

“Blacks make up 22.4% of our population, but only 2.4% of our businesses,” Fischer said. “Even among college graduates, the average Black graduate in Louisville earns almost $10,000 less per year than their White colleague.”

Fischer announced several actions he would take immediately to help dismantle systemic racism, which include the recruiting of police officers of color, supporting children of color with college scholarships, boosting Black employment and addressing the Black pay gap.

“We have to make these changes in our systems so the American dream can be guaranteed of equal justice and the right to life, liberty and the pursuit of happiness become a reality in the lives of everyone in our city,” Fischer said.

"Of course, we can't change America by ourselves, but we can show America how a city can change itself. We can channel the energy from the pain we've experienced and take ourselves from tragedy to transformation," the mayor stated.

Louisville become a flashpoint to six months of protests following the death of Breonna Taylor. Taylor was fatally shot by police in her home on March 13.

Police had originally gone to Taylor’s apartment as part of an ongoing investigation into an illegal drug-trafficking operation.

Officers obtained a “no-knock warrant” to search the apartment. Taylor and her boyfriend, Kenneth Walker, were inside at the time. One of the officers, Sgt. Jonathan Mattingly, claimed Walker shot him, after which he and the other officers returned fire.

Taylor was shot five times and died from her injuries. No drugs or cash were found at her home.

A grand jury later indicted Walker for the attempted murder of a police officer. The Commonwealth Attorney’s Office dismissed the charge without prejudice.

Walker filed suit against Mattingly and Det. Myles Cosgrove. The officers have filed a motion to dismiss the lawsuit, claiming immunity. A grand jury did not indict Mattingly or Cosgrove.

Taylor was shot eight times after officers used a battering ram to knock down her door and fired into the apartment after midnight March 13.

Instead, a grand jury indicted Det. Brett Hankison on three felony counts of wanton endangerment for shooting into an apartment next to Taylor’s. He was fired from the force.

Taylor’s death propelled widespread social justice protests across the country in the months that followed.