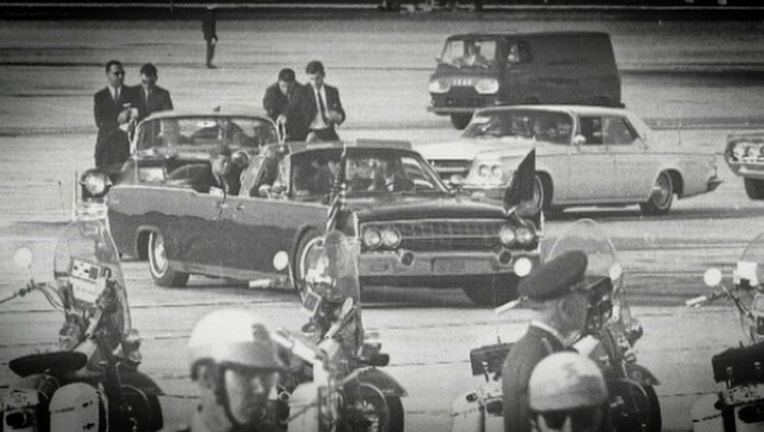 It's not every day that I get to ride in a motorcycle sidecar.

"You're as crazy as hell! I wouldn't ride in a sidecar for nothin,'" says the man driving.

My only comfort is knowing that 76-year-old Russell Groover has ridden just about every kind of motorcycle ever made. He was riding a big Harley-Davidson when he met President John F. Kennedy on November 18, 1963.

Groover was a Tampa motorcycle officer and his job was to protect the president.

ASSIGNMENT OF A LIFETIME

"We knew that President Kennedy was coming. There'd been rumors around the department that there had been threats on his life," says Groover, a retiree who now lives in Hernando County.

Any thought that it would be an easy day were laid to rest when he got his assignment. He would be in the center of the security detail as the rider closest to President Kennedy's limousine -- the same one that would be used in Dallas.

Before President Kennedy arrived, a Secret Service agent asked Groover what he would do if someone in the crowd started running toward the president.

"I said I'd hit them with the motorcycle. He asked me why. I said if I tried to shoot them, I could miss and hit somebody in the crowd," Groover recalled.

The agent just nodded, a sign to Groover that his plan was sound.

November 18, 1963 was sunny in Tampa. Groover and a contingent of motorcycle officers and Secret Service agents sped across the city as the presidential motorcade stopped at several locations for speeches.

Moments before a speech at the National Guard Armory, President Kennedy walked toward Groover and shook his hand.

"He said 'Do you have a family?' I said, 'I've got a son and a daughter about the same age as yours.' He told me I was a lucky man. I said 'I know it.' Then he walked on into the building."

"You're a lucky man." The words came rushing back to Groover as the news came from Dallas.

"It was like someone kicked me in the gut," recalled Groover. "When I was sitting in my house alone, that's what I kept hearing to myself -- 'You're a lucky man' -- and I knew it."

Groover would go on to ride hundreds of motorcycles over the decades, but no ride would ever make him forget the ride in Tampa with President Kennedy.

FIRST IN A SERIES: President John F. Kennedy visited Tampa on November 18, 1963, just four days before he was assassinated in Dallas. Lloyd Sowers interviewed seven people with special stories of the Tampa visit and how they were affected when the tragic news came from Dallas.