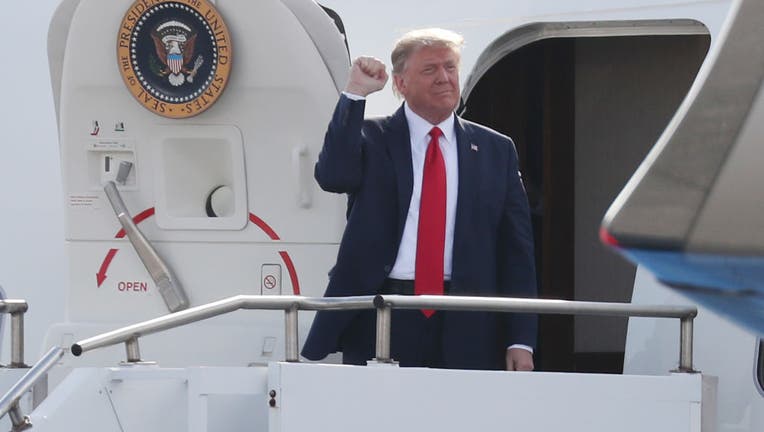 President Donald Trump departs Air Force One as he arrives to speak at a campaign event at the Ocala International Airport on October 16, 2020 in Ocala, (Photo by Joe Raedle/Getty Images)

WASHINGTON - President Donald Trump still has a path to the 270 Electoral College votes he needs to win reelection. But it requires everything to break in his direction a second time.

Persuadable voters in battleground states will need to overwhelmingly swing in his favor. He'll have to win back crucial voting blocs. And his turnout operation will need to dramatically outperform Democrat Joe Biden's in an extraordinarily turbulent year.

“In 2016, his chances of winning the election were those of drawing an inside straight in poker. ... The question this year is whether he can draw an inside straight two hands in a row," said Whit Ayres a veteran Republican pollster. “It is theoretically possible but practically difficult.”

While Trump has multiple roads to victory, his most likely route hinges on winning two crucial battleground states: Florida and Pennsylvania. If he can claim both and hold onto other Sun Belt states he narrowly carried in 2016 — North Carolina and Arizona — while playing defense in Georgia and Ohio, which he won handily in 2016 but where Biden is now competitive, he will win.

RELATED: Trump returning to Florida for two rallies on Friday

Trump's campaign is also continuing to pour time and money into Wisconsin and Michigan, longtime Democratic strongholds he flipped his way by the slimmest of margins four years ago, while trying to defend Iowa and Maine's second congressional district and grab Nevada and Minnesota, two states his 2016 rival Hillary Clinton narrowly won.

Trump's campaign points to other factors pointing in their favor: The campaign and the Republican Party have spent years investing in a powerful voter outreach operation and have 2.5 million volunteers knocking on millions of doors each week. They have seen spikes in GOP voter registration in several keys states. And Trump voters are more enthusiastic about their candidate than Democrats are about Biden. The Democrats are driven more by their hate for Trump.

“We feel better about our pathway to victory right now than we have at any point in the campaign this year," Trump's campaign manager, Bill Stepien, told staff on a conference call this week. "And this optimism is based on numbers and data, not feel, not sense.”

But polling shows Trump trailing or closely matched in nearly every state he needs to win to reach 270 Electoral College votes. Barring some kind of major upset, Trump needs to hold onto at least one of the three rustbelt states he won in 2016: Pennsylvania Wisconsin or Michigan, said Paul Maslin, a longtime Democratic pollster based in Wisconsin.

“I don't see any other way for Trump to do this," he said.

Fox News polls released Wednesday show Biden with a clear advantage in Michigan and a slight one in Wisconsin. In Pennsylvania, recent polls show Biden ahead but vary on the size of his lead.

For all of that, though, Trump's team can draw comfort from this historical footnote: In all three states, Clinton led in the polls in the final weeks of 2016.

But Trump's “fundamental problem,” said Ayres "is that a large number of states that he won comfortably last time” are currently close.

While Trump's upset win in 2016 still haunts Democrats and has left many voters deeply distrustful of public polls, close watchers of the race stress that 2020 is not 2016.

Biden is better liked than Clinton and polls suggest there are now fewer undecided voters, who broke for Trump in the race's final weeks four years ago. And Clinton was hobbled in the final weeks by a series of setbacks including the late reopening of an FBI investigation into her emails. The impact of any additional “October surprise" this time would be limited by the record number of voters who have already cast their ballots.

Trump's team, for its part, has been working to repair his standing with suburban women and older voters soured by his handling of the pandemic, while trying to boost enthusiasm among targeted groups like Catholic and Second Amendment voters as well as aiming to build support among Black and Latino voters.

“He’s again at the thread-the-needle stage," said Lee M. Miringoff, director of the Marist College Institute for Public Opinion. He noted that because Trump won key states by so few votes last time around, he has very little margin for error.

Two weeks before Election Day, the Biden campaign has the advantage in Sunshine State advertising and cash. Biden’s ad machine took off around Labor Day, about the same time President Trump’s ad team slowed down and cut back.

Still, Miringoff stressed that while many polls may favor Biden, they do not account for “cataclysmic events," such as potential voter suppression, election interference, or court challenges that could halt votes from being counted. Democrats are expected to cast far more ballots by mail, which are rejected at higher rates than in-person ballots, even in normal years.

“The polls could both be right and wrong at the same time,” he said, “because they could poll those who think they voted" but whose votes end up not counted.

RELATED: More than a quarter of Florida's voters have already cast ballots

With 29 electoral votes, Florida is arguably the most crucial state for Trump. A loss there would make it nearly impossible for him to retain the White House. But the state, which has sided with the winner of nearly every presidential race for decades, is also known for razor-tight elections — most notably in 2000 when Republican George W. Bush defeated Al Gore by 537 votes after a recount.

Both sides point to signs of promise in the state, with Republicans saying they see growing support among Hispanics while Democrats focus on seniors. While polling in early October showed Biden with a slight advantage, two recent polls have the two candidates neck and neck.

“From everything I can see, it’s a statistical tie,” said Jennifer Krantz, a Tampa native and Republican strategist who has worked on multiple state races. If that's the case, she said, ground game could make the difference.

With Election Day just 23 days away, both candidates have their sights set on Florida. It's a key state in presidential elections with 29 electoral votes up for grabs.

In 2016, Clinton won more votes in the state than Barack Obama in both his races, with commanding leads in Democratic strongholds like Miami-Dade. But Trump ran up the score with stunning turnout in smaller counties, including across the Florida Panhandle.

RELATED: Why you're seeing so many Joe Biden ads on TV in Florida

Trump's campaign expects do even better this time thanks to a robust turnout operation. Indeed, Republicans say they have registered 146,000 more voters than Democrats since the pandemic hit in March, leaving Democrats with their smallest lead since the state began tracking.

Democrats, meanwhile, hope to run the table when it comes to early voting and vote by mail — though some remain cautious after 2016.

“I think we’re all in this collective PTSD panic," said Democratic strategist Steve Schale, who runs the pro-Biden super PAC “Unite The Country.”

It's a similar story in Pennsylvania, where two recent polls show Biden maintaining a clear lead and another suggests a narrow one. Trump won the state by just over 44,000 votes last time, powered by an overwhelming showing in rural areas and small towns and cities.

RELATED: Why Pinellas County is the one to watch on election night

Trump's team is counting on those trends to hold this time around.

“It’s déjà vu all over again," said Robert Gleason, the former chair of Pennsylvania's Republican Party who lives in the city and has been helping Trump's campaign “There's a tremendous amount of enthusiasm."

Just as in Florida, while Democrats hold a substantial voter registration edge, Republicans have narrowed their gap by about 200,000 from four years ago, thanks in part to Democratic party-switchers. Trump campaign aides stress that number is five times Trump’s 2016 vote margin.

But Trump's campaign is also facing grimmer prospects in areas like the vote-rich Philadelphia suburbs. And Biden is not Clinton, an historically unpopular candidate who particularly turned off white, working-class men. Biden not only comes from the working-class bastion of Scranton, but has built his political persona as a champion of those voters and their ideals.