So he put up a giant sign in support of the president along Interstate 4. Josh Cascio reports.

PLANT CITY, Fla. - Take a drive along Interstate 4 in Plant City and you can’t miss the huge tribute to President Donald Trump.

The mega MAGA messaging is the handiwork of RV repairman Hoke Minton.

The display includes flags and artwork framing "TRUMP 2020" scrawled across the side of a trailer. It's clearly visible from the highway even at night.

“This here is just to get to the I-4 corridor,” Minton said. “Out here we got 150,000 cars a day coming by here. We're just doing this to show people we love our president.” 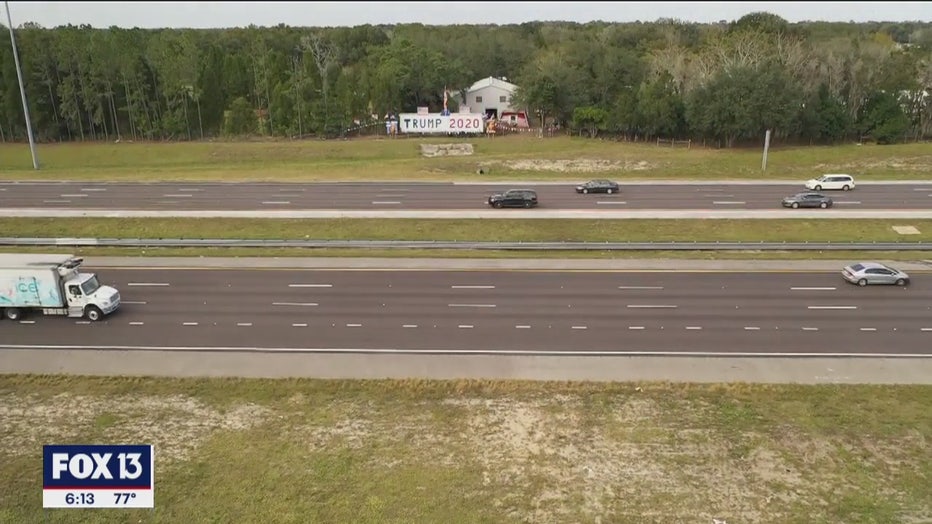 It went up in September and, for Minton, it was was a labor of love, who claims his business has doubled since President Trump has been in office.

"The first year that he was [president], my business picked up four extra months of busy season and I've been the busiest I've ever bee in the mobile RV service," Minton said. "A lot more people are spending money, I mean, it doubled my business."

He also says President Trump is the first president he’s voted for.

“When President Trump come along, I said, 'There's a man out for the American people,' so I went down and registered to vote, voted for him,” he said.

Minton said he isn’t worried about any criticism or talks of impeachment. What matters to him is re-election.

“Yes sir we're making the I-4 corridor great again, no doubt about it,” he said.