Sarasota school board member trying to get graduation back

SARASOTA, Fla. - Postponed until July, graduation was the only part of 2020 mother Susannah Johnson and her family held out hope for.

"We have been looking forward to her graduation since she went to Venice Elementary School. We said, 'One day you’ll be graduating from that big high school,'" Johnson said.

On Friday, parents across the Sarasota County School District found out high school graduation was canceled because the risk of spreading of COVID-19 was too great.

The second blow for Johnson was breaking the news to her graduate, Jill.

"It was a punch to the gut," said Johnson. "I got tears on the other end of the phone and somebody who was very very upset."

Anna Beard doesn't understand why the graduation was canceled. Venice High School had a plan. The ceremony would bet outdoors at the Cool Today Stadium in North Port, which holds 6,000 people and gave the district plenty of room to social distance. 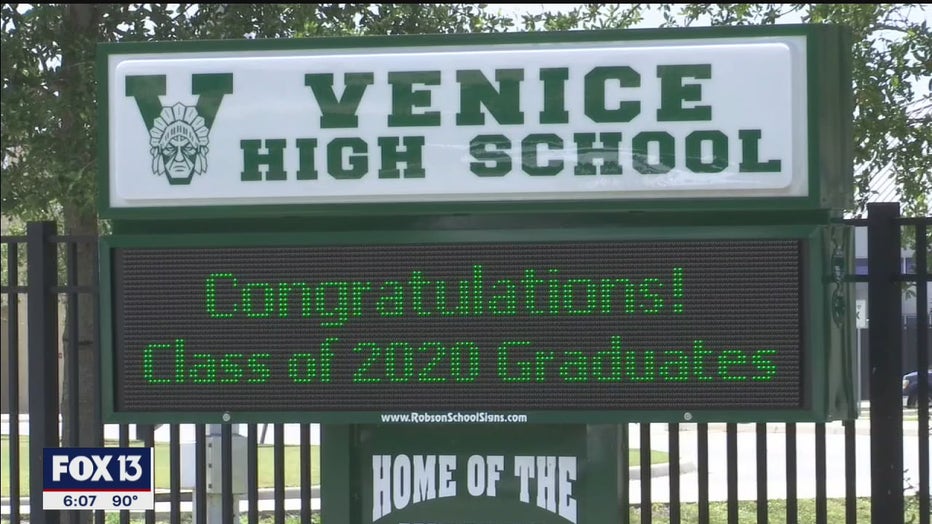 "We were so looking forward to graduation. We knew it was going to be safe, outdoors and socially distant," said Anna Beard. "They just acted quickly, they didn't reach out to anybody in the community. An email was sent out. As a parent, I would have let them walk across the stage and watched the live stream from home. If you’re telling me it’s not safe to have graduation outside, then why is it OK to have athletics inside in a weight room? Why is it OK for a local school to show pictures on social media of football players grouped together drinking Icees? Why is that safe, but this isn't?”

School board member Eric Robinson said this came as a surprise to him, as well.

"It was a bindery decision, either A or B, and the school board was not consulted," said Robinson.

He said because a few Sarasota County graduations were planned inside, they decided to cancel them all.

"I saw the community. The community was hurt by this. This is something the kids needed," said Robinson.

He is working with parents from Venice and North Port high schools and promised to donate part of his school board salary to make a private graduation happen. Details are being worked out, but he's looking at the week of July 13.

"We are trying to look over perimeters of taking temperatures of everybody, people wearing masks, people social distancing...We are looking outside the box to make sure this happens. I’m just disappointed the school district didn’t think outside of the box to make it happen," he said.

Parents have started a petition to reinstate Venice High School's graduation. In Manatee County, officials say they are now looking closely at holding graduations at LECOM Park due to rising COVID-19 numbers.