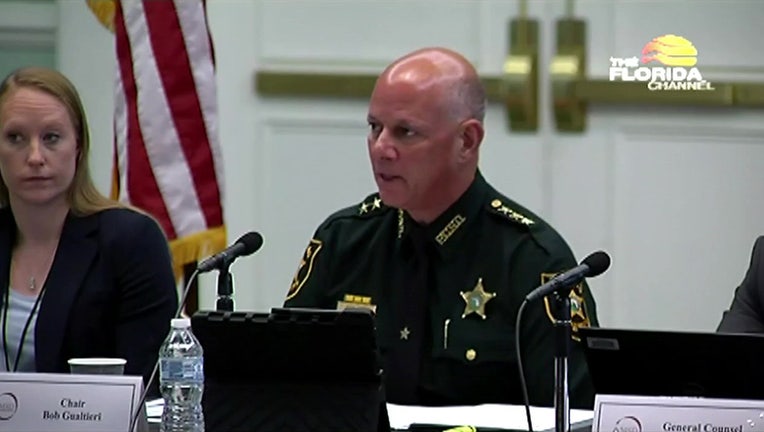 TALLAHASSEE, Fla. - In early September, law enforcement officers arrested a 15-year-old student who they say scribbled in a notebook six pages of specific and well-researched strategies to carry out a mass shooting at Baker County High School.

The student wrote he wanted to “kill officers and then the gate keeper --- then go one by one” and that he would have nine minutes to gun down as many people as possible, considering the distance between the sheriff’s office and the school, according to Maj. Randy Crews of the Baker County Sheriff’s Office.

But after the student was arrested, a judge dismissed the case saying prosecutors did not prove the threat was “transmitted" under state law, Crews told the Marjory Stoneman Douglas High School Public Safety Commission on Tuesday.

Crews told the commission, which was created after last year’s mass shooting that killed 17 people at Marjory Stoneman Douglas High School in Broward County, that state law needs to be clarified to allow the prosecution of potentially dangerous juveniles, like the Baker County student.

“I am not a lawyer, but I want to make you aware of this situation,” Crews said. “If these judges make these rulings, we are moving backwards.”

“If these judges make these rulings, we are moving backwards.”

The juvenile was not named during Tuesday’s commission meeting, but commission Chairman Bob Gualtieri later identified the judge as Circuit Judge Gloria Walker of the 8th Judicial Circuit, which is made up of Baker, Alachua, Bradford, Gilchrist, Levy and Union counties.

Crews argued the student’s case shouldn’t have been dismissed because the threats in the notebook were unearthed after the student showed them to a classmate, who then reported it to a teacher.

“This is a case where everything was done the way it should have been done,” Crews said. “A kid saw something and said something, took it to the teachers, school resource officers were involved, we investigated."

Upon learning about the dismissal of the case, members of the state commission were outraged and worried the student, who is no longer detained, could be a danger to the North Florida community.

“The judge falls outside the scope of reasonableness. I just hope they can live with themselves if something happens,” said Commissioner Ryan Petty, whose daughter Alaina was killed in the Marjory Stoneman Douglas shooting in Parkland.

In a Sept. 9 news release, the Baker County Sheriff’s Office said the juvenile admitted to detectives that he wrote multiple plans to carry out the school shooting with the specific campus locations, dates and times and the specific people he would attack. But the student denied any intention of going through with those plans, the sheriff’s office said.

“The judge falls outside the scope of reasonableness. I just hope they can live with themselves if something happens."

Gualtieri, who is the sheriff of Pinellas County, said that while he thinks the judge’s ruling is “disturbing,” he doesn’t know what the commission could recommend lawmakers to do.

“The question is, does the statute need to be changed? I don’t see anything in statute that needs to be changed,” Gualtieri said.

Commissioner Max Schachter, father of slain Parkland student Alex Schachter, was frustrated by Gualtieri’s response and suggested the commission scold the judge in a letter for ruling against law enforcement’s actions to “prevent the next Parkland.”

“The commission should write a letter emphasizing … that releasing this person back into society --- knowing how they want to kill all these people --- is irresponsible and puts the community at risk,” Schachter said.

But no other commissioner agreed with him.

“For us to intervene and chastise a judge and their conduct, I don’t think it is appropriate,” said Commissioner Bruce Bartlett, the chief assistant state attorney for the judicial circuit that includes Pinellas and Pasco counties.

Instead, Bartlett said voters could vote out the judge in the next election.

“This seems to be a situation that happened in one place and a decision made by one court,” the Pinellas sheriff said. “It’s unfortunate and extremely troubling, and all we can do is hope this kid, who is out on the street does not execute his plan.”