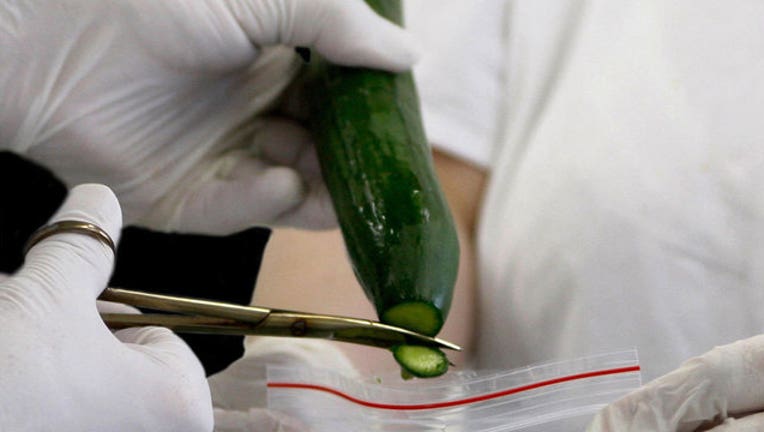 The woman, who already had other serious health issues, died in late August and medical records indicate that salmonella was a "contributing factor," said Carrier Williams, a spokeswoman for the Texas Department of State Health Services.

Symptoms of salmonella include fever, diarrhea, nausea, vomiting and abdominal cramps. Illness typically lasts four to seven days, but infections can be severe and sometimes fatal. Children, the elderly and people with compromised immune systems are at greater risk of having severe symptoms.

The U.S. Centers for Disease Control and Prevention reported Wednesday that there have been 341 reported cases of salmonella in 30 states since July 3. Seventy people have been hospitalized.

California had the most illnesses, at 72, followed by Arizona with 66 and Utah with 30.

Health officials in several states have found strains of salmonella in cucumbers grown in Mexico and distributed by Andrew & Williamson Fresh Produce of San Diego.

The company has recalled its "Limited Edition" brand cucumbers and has said the health and safety of its customers are its highest priority.

The outbreak also has promoted Overwaitea Food Group, a Canadian grocery store operator, and Safeway to recall some cucumbers and products containing cucumbers from Canadian stores, although no salmonella illnesses linked to cukes have been reported in that country.

Here are the states where salmonella has been reported, with the number of cases in parentheses: