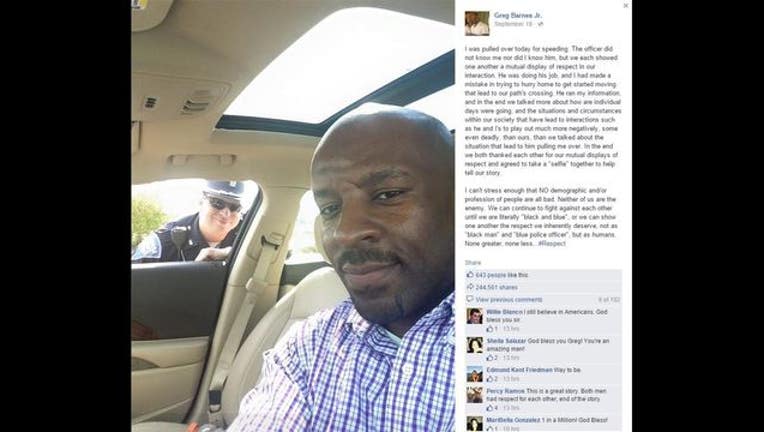 Greg posted this photo to Facebook to encourge mutual #respect.

MUNCIE, Indiana. (FOX 11) - A selfie taken by a African-American man during a traffic stop by a white police officer was going viral across the internet over the weekend. But not for the reasons you may think...

Greg Barnes Jr. of Muncie, Indiana felt obligated to snap the photo featuring himself and the officer after a brief conversation he and the officer had following the traffic stop.

After the officer ran Barnes's information, he returned to the car and began a brief conversation about the situations and circumstances both he and Barnes find themselves in these days with African-American and police officers. They noted that most talks end up negative -some even deadly...but theirs was different, and they agreed to take the selfie and post to Facebook in hopes of spreading their story.

The point they both wanted to make was that not all people are bad, not all are racist. They continued to explain "that we can all continue to fight against each other until we are 'black & blue', or we can show one another the respect both inherently deserve - not as a 'black man' or a 'blue police officer' - but as human beings."

"None greater, none less."

Barnes ended the posting with a simple hashtag. #Respect.