TAMPA, Fla. - Relief could be coming to a part of the Seminole Heights community that has been frustrated by months of construction, Tampa City Council members said Thursday.

A portion of Florida Avenue is currently shut down and Crest Avenue has been torn up and under construction since late last year.

During the city council meeting Thursday, a city deputy administrator overseeing the project told council members curbs and the first layer of asphalt should be installed this week on Crest Avenue. Florida Avenue, meanwhile, is scheduled to reopen October 7.

"It's incredibly hard for the residents who have been suffering through all of the headache of construction," said Councilwoman Lynn Hurtak, whose district includes Seminole Heights, adding city asked the contractor to address complaints about a lack of communication regarding delays and workers littering. "The construction company heard us. They replaced two of their managers. They have found other solutions so that there isn't the trash issue. Residents have been very happy with that. But the thing that I'm most pleased with is the fact that, in some of these incredibly affected areas, that the company is going door to door to talk to the residents about exactly what is happening."

The construction stems from the city’s multimillion-dollar project to update pipes throughout Tampa, making changes to the city’s century-old stormwater infrastructure to help with flooding issues. 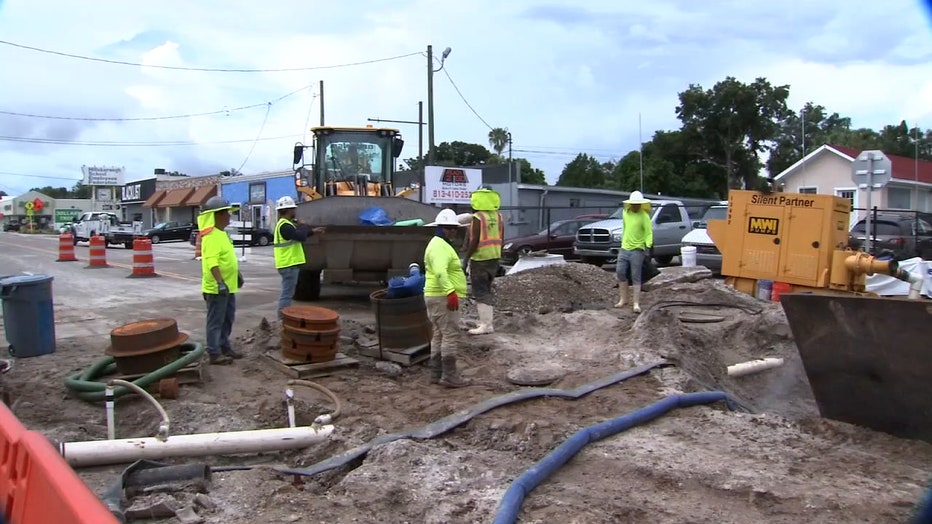 Home and business owners are skeptical the work will be done on this latest schedule, following several previous delays. Susie Ulrey, who lives on Crest Avenue, described the situation as "a nightmare."

Ulrey has Multiple Sclerosis and uses a motorized wheelchair. She told FOX 13 she's barely been able to leave her house due to the construction.

"My independence has been greatly hindered," she said. "With me being disabled, I've essentially been landlocked. I can't go down the street."

Businesses on Florida Avenue, meanwhile are also struggling. Several store owners have been seeing a thinning crowd of customers since crews shut down part of the road.

"That's been the challenging part," said Jason Newman, the co-owner of Smoke Signals. "We've cut our pay. My business partner is not getting a paycheck this month. Honestly, we're going through our savings."

Newman said the community has heard plenty of promises and apologies about the delays.

The city told FOX 13 that the delays are attributed to supply chain shortages.

Even after these roads reopen, the flood relief project is far from over. Hurtak said all of Seminole Heights is scheduled to receive a stormwater infrastructure upgrade. The project is expected to take about three years.

On Thursday, Sept. 29, Tampa city council members plan to give an update at their meeting and discuss how they can help those affected by the projects.