The PACT Act is now headed to President Joe Biden's desk and will await his signature. Former "The Daily Show" host and comedian Jon Stewart has been an avid advocate for the bill and despite the passage by the Senate, had some somber words to share during a press conference on Tuesday. "But I will say this, I'm not sure I've ever seen a situation where people who have already given so much had to fight so hard to get so little. I hope we learned a lesson," Stewart said.

WASHINGTON - A bill enhancing health care and disability benefits for millions of veterans exposed to toxic burn pits won final approval in the Senate on Tuesday, ending a brief stalemate over the measure that had infuriated advocates and inspired some to camp outside the Capitol.

The Senate approved the bill by a vote of 86-11. It now goes to President Joe Biden’s desk to be signed into law. Biden described the legislation as the biggest expansion of benefits for service-connected health issues in 30 years and the largest single bill ever to address exposure to burn pits.

"I look forward to signing this bill, so that veterans and their families and caregivers impacted by toxic exposures finally get the benefits and comprehensive health care they earned and deserve," Biden said.

The Senate had overwhelming approved the legislation back in June, but a do-over was required to make a technical fix. That process derailed when Republicans made a late attempt to change another aspect of the bill last week and blocked it from advancing. 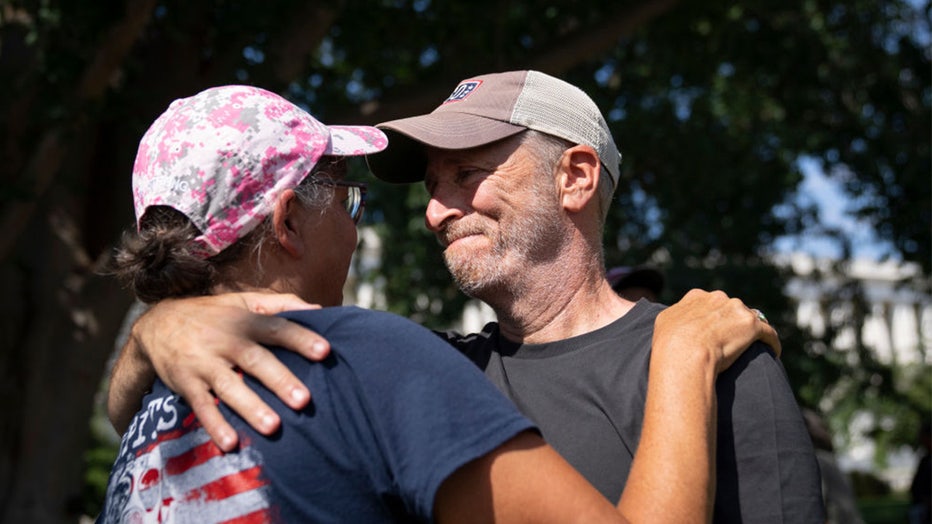 The abrupt delay outraged veterans groups and advocates, including comedian Jon Stewart. It also placed GOP senators in the uncomfortable position of delaying the top legislative priority of service organizations this session of Congress.

A group of veterans and their families have been camping out at the Capitol since that vote. They had endured thunderstorms and Washington's notorious summer humidity, but they were in the galleries as senators cast their votes.

"You can go home knowing the good and great thing you have done and accomplished for the United States of America," Senate Majority Leader Chuck Schumer, D-N.Y., told them.

The legislation expands access to health care through the Department of Veterans Affairs for millions who served near burn pits. It also directs the VA to presume that certain respiratory illnesses and cancers were related to burn pit exposure, allowing veterans to obtain disability payments to compensate for their injury without having to prove the illness was a result of their service.

Roughly 70% of disability claims related to burn pit exposure are denied by the VA due to lack of evidence, scientific data and information from the Defense Department.

The military used burn pits to dispose of such things as chemicals, cans, tires, plastics and medical and human waste.

Hundreds of thousands of Vietnam War era veterans and survivors also stand to benefit from the legislation. The bill adds hypertension, or high blood pressure, as a presumptive disease associated with Agent Orange exposure.

The Congressional Budget Office projected that about 600,000 of 1.6 million living Vietnam vets would be eligible for increased compensation, though only about half would have severe enough diagnoses to warrant more compensation. 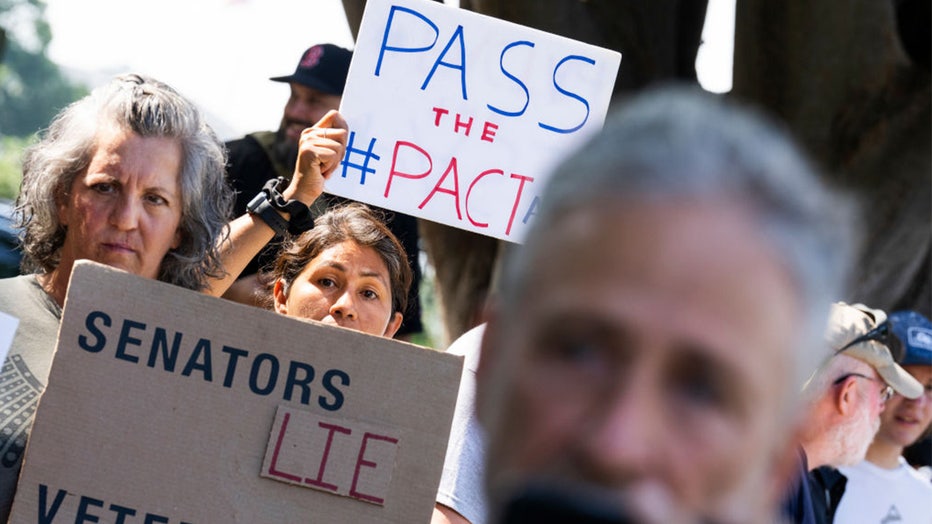 Comedian Jon Stewart, right, attends a rally outside of the U.S. Capitol to call on the Senate to pass the Pact Act, which aims to expand health care and benefits to veterans exposed to toxins while serving, on August, 2, 2022. (Tom Williams/CQ-Roll Call, Inc via Getty Images)

The bill is projected to increase federal deficits by about $277 billion over 10 years.

The bill has been a years-long effort begun by veterans and their families who viewed the burn pits used in Iraq and Afghanistan as responsible for respiratory problems and other illnesses the veterans experienced after returning home. It was named after Sgt. First Class Heath Robinson from Ohio, who died in 2020 from cancer he attributed to prolonged exposure to burn pits. His widow, Danielle Robinson, was first lady Jill Biden's guest at the president's State of the Union address earlier this year.

Stewart, the former host of Comedy Central's "The Daily Show," also brought increased exposure to the burn pit maladies veterans were facing. He also was in the gallery watching the vote Tuesday. He wept and held his head in his hand as the final vote began.

"I’m not sure I’ve ever seen a situation where people who have already given so much had to fight so hard to get so little," he said after the vote. "And I hope we learn a lesson."

The House was the first to act on the burn pits legislation. An earlier version the House approved in March was expected to increase spending by more than $320 billion over 10 years, but senators trimmed some of the costs early on by phasing in certain benefit enhancements. They also added funds for staffing to help the VA keep up with the expected increase in demand for health care and an increase in disability claims.

Jon Stewart demands justice for US veterans exposed to toxins

Jon Stewart spoke at a rally in Washington, D.C. in support of veterans who have been diagnosed with illnesses as a result of working around burn pits following military conflicts.

Some GOP senators are still concerned that the bill will increase delays at the VA because of an increased demand for veterans seeking care or disability compensation.

"What we have learned is that the VA cannot deliver what is promised because it does not have the capacity to handle the increase," said Sen. Marsha Blackburn, R-Tenn.

Sens. Jon Tester, D-Mont., and Jerry Moran, R-Kan., led the effort to get the bill passed in the Senate. After passage, Tester told reporters he received a call from Biden, thanking him for "taking a big weight" off his shoulder.

For Biden, the issue is very personal. He has raised the prospect that burn pits in Iraq were responsible for the death of his son Beau.

"We don’t know for sure if a burn pit was the cause of his brain cancer, or the diseases of so many of our troops," Biden said at his State of the Union speech. "But I’m committed to finding out everything we can."

Moran said that when the bill failed to pass last week, he was disappointed but remembered the strength of the protesters who had sat outside in the scorching heat for days.

"Thanks to the United States Senate for demonstrating when there’s something good and a good cause, this place still works," Moran said.