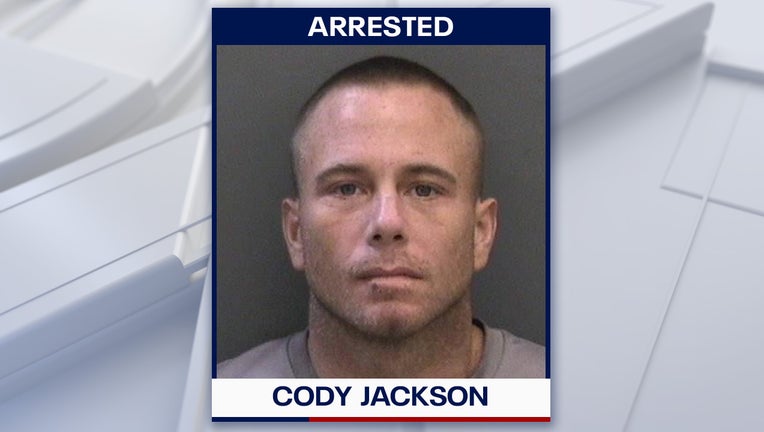 PLANT CITY, Fla. - Investigators say a man suspected of beating and kidnapping a woman in Seffner has been arrested after more than a week on the run.

Dispatchers had received a 911 call from the Circle K store at 2210 N. Park Road, advising them that a silver Chevrolet Cobalt had just been stolen and was leaving the store going northbound.

The caller described the suspect as a white male wearing a brown and beige cowboy hat.

An officer responding to the scene spotted the vehicle at a BP gas station on Wheeler Street and pulled behind the car.

Police said the driver attempted to flee, but another officer managed to pull in front of the vehicle and prevent him from leaving.

Officers ordered Jackson out of the car multiple times before he finally complied with commands.

The owner of the stolen car was brought to the scene and told officers she did not know Jackson and had not given him permission to take her vehicle.

When officers performed a check, they found outstanding warrants out of both Citrus and Hillsborough Counties for Jackson's arrest.

"Thanks to the outstanding teamwork with Plant City PD, superb attention to detail, and unwavering dedication to bringing this man into custody, we can say that a dangerous individual is off the streets," said Hillsborough Sheriff Chad Chronister. "Criminals do not follow jurisdictional boundaries, so partnerships with our neighboring agencies are essential to keeping our community safe."

A Hillsborough County man is on the run after a violent attack and kidnapping. The sheriff’s office says the 32-year-old beat the victim, then forced her into a car and tied her up, driving to citrus county before the woman managed to escape. A gas station clerk intervened to help save the victim.

The Hillsborough County Sheriff's Office said Jackson got into a fight with the victim at a home on King Charles Circle around 11 a.m. Sunday, May 9.

Investigators said Jackson grabbed a piece of wood and hit the victim on the head and then forced her into a 2003 silver Mitsubishi Eclipse before driving away. They stopped at one point so Jackson could tie the victim's ankles and wrists with extension cords, according to HCSO.

Jackson drove to Citrus County and stopped at a Citgo gas station in Inverness.

While inside the convenience store, the victim was able to break free from the restraints. The clerk working at the store said he ran out to try and stop his victim from escaping.

"He [had] seen the girl that he had bound in the car escaping from the car and he started running out the door. While he was running out the door she was running to my private door that was locked," Rachel Craddock recalled. "She was banging on it, saying, 'Help me! Help me! Help me! He’s gonna kill me! He’s right there, he’s right there!' And I hurried up and unlocked the door and I pulled her in and I locked that door."

With all the doors locked and the woman safely inside, Craddock called 911. She says the victim was clearly hurt and had a gash on her head.

"Extension cords around her arms and she had matted hair with blood, and all I could think was get her safe into the store with me," Craddock said.

Deputies said that Jackson fled the area after realizing the victim had escaped. The vehicle was later located near the intersection of US 41 North and Sunset Lane in Tampa.

The victim was taken to Citrus Memorial Hospital.

"He was threatening this victim's life and it could have ended in tragedy had the victim not managed to escape just in time," Chronister said.