SEFFNER, Fla. - Hillsborough deputies are searching for a man suspected of beating and kidnapping a victim in Seffner.

The sheriff's office says 32-year-old Cody Jackson got into a fight with the victim at a home on King Charles Circle around 11 a.m. Sunday.

Investigators said Jackson grabbed a piece of wood and hit the victim on the head and then forced her into a 2003 silver Mitsubishi Eclipse before driving away. They stopped at one point so Jackson could tie the victim's ankles and wrists with extension cords, according to HCSO.

Jackson drove to Citrus County and stopped at a Citgo gas station in Inverness. 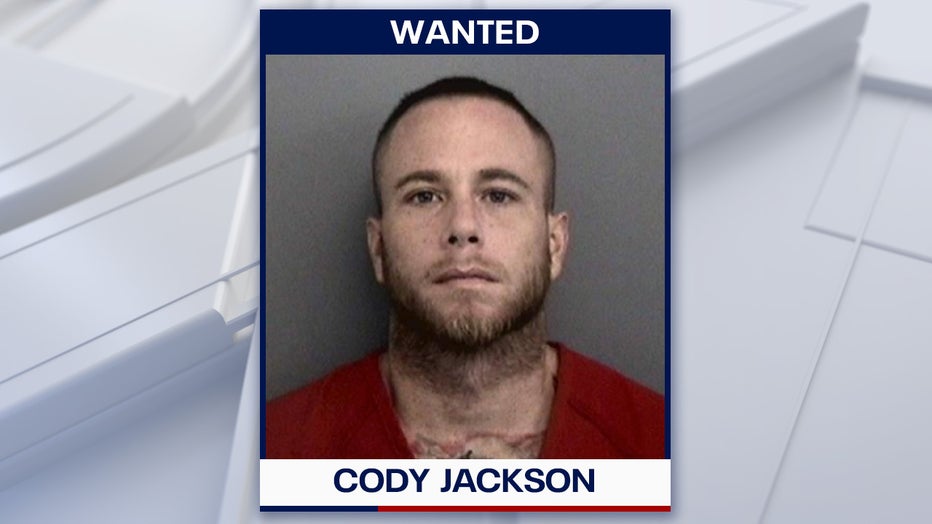 While inside the convenience store, the victim was able to break free from the restraints. The clerk working at the store said he ran out to try and stop his victim from escaping.

"He seen the girl that he had bound in the car escaping from the car and he started running out the door. While he was running out the door she was running to my private door that was locked," Rachel Craddock recalled. "She was banging on it, saying, 'Help me! Help me! Help me! He’s gonna kill me! He’s right there, he’s right there!' And I hurried up and unlocked the door and I pulled her in and I locked that door."

With all the doors locked and the woman safely inside, Craddock called 911. She says the victim was clearly hurt and had a gash on her head.

"Extension cords around her arms and she had matted hair with blood, and all I could think was get her safe into the store with me," Craddock said.

Deputies said that Jackson fled the area after realizing the victim had escaped. The vehicle was later located near the intersection of US 41 North and Sunset Lane in Tampa.

The victim was taken to Citrus Memorial Hospital and is recovering.

"He was threatening this victim's life and it could have ended in tragedy had the victim not managed to escape just in time," Sheriff Chad Chronister said. "This attack was targeted. However, given Jackson's violent behavior, we are urging anyone who comes in contact with him to please call us immediately."

Investigators said Jackson may be armed with a weapon, and urged members of the public not to engage with him.

Jackson is 5 feet 9 inches tall and weighs 165 pounds. He has numerous tattoos, including one that reads "Pure Bred" on his stomach.

Anyone with information on Jackson's whereabouts is asked to call the Hillsborough County Sheriff's Office at 813-247-8200.