NEW ORLEANS, La. - A speed limit for ships in part of the Gulf of Mexico south of the Florida Panhandle is needed to protect the few remaining endangered whales there, environmental groups said Tuesday.

The groups asked the National Oceanic and Atmospheric Administration’s Fisheries Service to set a 10-knot (11.5 mph, 18.5 kph) speed limit in an area covering about 11,500 square miles (30,000 square kilometers) off Florida and Alabama.

Shipping interests did not immediately answer requests for comment on the petition, which also asks NOAA Fisheries to make all shipping detour around the whales’ core habitat at night.

RELATED: Scientists scramble to study newly-discovered whale species before it's too late

"One of the rarest, most endangered whales on the planet is in our backyard, and we have a responsibility to save it," said Michael Jasny, director of the Marine Mammal Protection Project at the Natural Resources Defense Council, one of the groups.

There are fewer than 100 of the slender filter feeders, which were classified in January as a new species. Several other kinds of whales can be found in the Gulf, but Rice’s whales are the only baleen whales living there year-round. 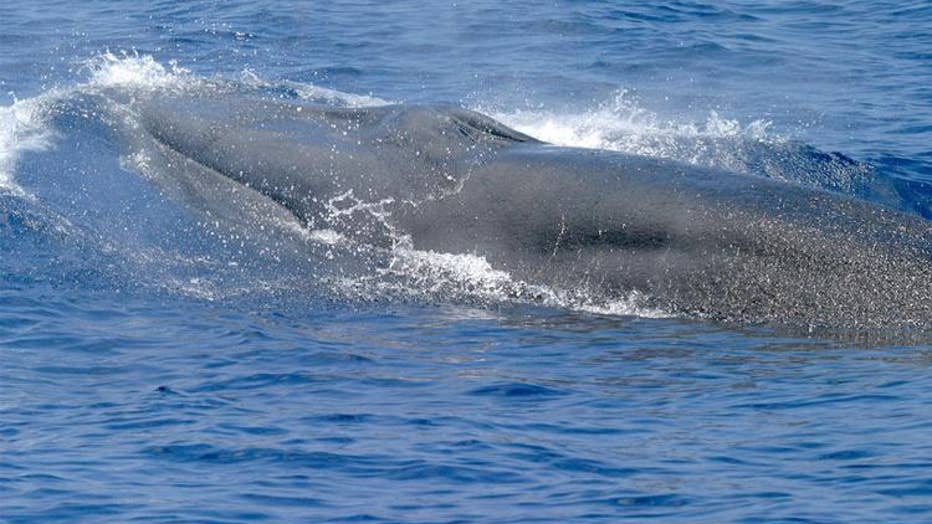 Photograph of a Rice's whale spotted in the Gulf of Mexico.

The Coast Guard’s navigation rules describe what must be considered in deciding a safe speed but those rules don’t include speed limits.

Ships should avoid the whales’ core habitat at night because Rice’s whales may spend much of that time near the surface, the petition said.

One tagged whale stayed within 15 meters (nearly 50 feet) of the surface at night, diving deep during the day, according to the report in January.

That is "within the draft depths of most commercial vessels. Such behavior significantly raises the risk of vessel strikes," the petition said.

The groups also want all ships to keep an eye on the water in the proposed speed zone and to stay at least 550 yards (500 meters) from any whales they spot.

In addition to nearly 9,100 square miles of core habitat, the groups want the rules to apply in a 10-kilometer (6.2-mile) buffer zone around that habitat.

That totals about 30,000 square kilometers, less than 5% of the northern Gulf of Mexico and about 12.5% of the waters off of Florida, Jasny said.

NOAA Fisheries ordered similar measures last year for oil and gas industry vessels in the whales’ core habitat but hasn’t done so for any other sort of vessel, the groups’ news release said.

Healthy Gulf, the Center For Biological Diversity, Defenders Of Wildlife, Earthjustice, and the New England Aquarium joined the petition.