TAMPA, Fla. - Through the sounds of ‘Amazing Grace,’ guests and officials from MacDill Air Force Base spent the morning remembering the nearly 3,000 lives lost on September 11th, and the lives of the brave who answered the call to serve during the last 20 years.

The service began with a presentation of the flags by a joint-service color guard, followed by a speech by Special Operations commander General Richard Clarke.

"On that morning in 2001, determined Al Qaeda attackers claimed 2,977 lives," the four-star general said. "Lives of Americans going to work. Those at work, of families traveling to see loved ones, and tourists visiting our nation’s landmarks."

He said a new spirit was awakened after the dust of the attacks settled.

"And that spirit was not one the attackers expected. Out of tragedy, a generation rose up to answer a call. One heard from freedom-loving nations, nationwide and worldwide." 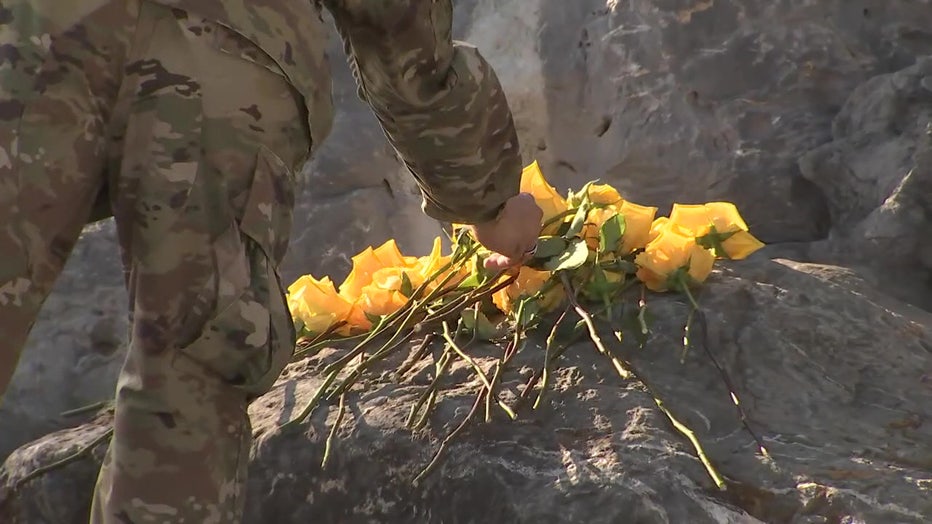 RELATED: From Ground Zero to Afghanistan, veteran reflects on rage and perspective

Special Operations Command at MacDill Air Force Base played a critical role on September 11th, helping coordinate our nation’s military response after the attacks – 660 Special Operations teammates have died since that date.

"The names as mentioned, of those teammates are inscribed in our Special Operations Memorial wall behind me."

More than 2,700 came home wounded – many with the internal wounds of war through PTSD. Clark invoked the words of World War I veteran Alvin York, a Medal of Honor recipient.

"Liberty, freedom and democracy are freedom are prizes awarded only to those peoples who fight to win them and then keep fighting eternally to hold them," Clarke said. "He said this several months before the Pearl Harbor attacks. We know how a past generation, the Greatest Generation, heeded York’s call. In the ashes of 9/11, this generation answered that call. Freedom was challenged 20 years ago, and men and women rose to defend it with unmatched courage."

It’s that spirit, Clarke says, that was remembered Friday afternoon.

RELATED: Air Force fighter pilot says he was prepared to use his plane as a weapon to protect DC on 9/11

From Palm Harbor to Venice to Ybor, here's a look at some ways the Tampa Bay area honors the lives lost on September 11th.