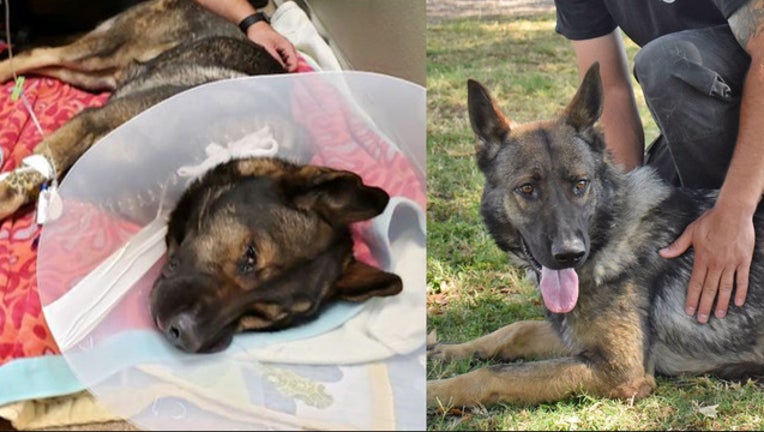 ST. PETERSBURG, Fla. - Titan's back on the job!

The St. Petersburg Police Department K-9, who was shot 6 months ago while chasing a suspect, has fully recovered and is back at work.

The police department posted a video of Titan running drills with an officer, showing how far he's come during his recovery.

"Lots of patience, good vet care, and rehab...and St. Pete PD's K-9 Titan has recovered and is back on the street!" the department wrote on Facebook.

Titan was severely injured back in March after investigators said 23-year-old Elijah Johnson fled from a traffic stop by a Pinellas County deputy.

Johnson then fired shots at Sgt. David Stang with the Pinellas County Sheriff's Office, shooting him in the shoulder as he sat in his patrol car. Johnson then took his own life, police said.

Titan was treated at the Partridge Animal Hospital in St. Petersburg. Photos of the brave K-9 broke hearts across the country, showing him laying down with a neck collar around his head and hooked up to an IV machine.

"He's up and around but still on antibiotics and pain meds -- he doesn't like that IV too much!" police wrote on Twitter in April. "Hopefully he'll be able to go home this week."

Now, Titan is back on the beat -- and ready to take down more bad guys.