ST. PETERSBURG, Fla. - One of the stars of this year's Super Bowl advertisements is actually a member of St. Petersburg Police Department SWAT.

It's called Spot and it's referred to as the Tesla of robots.

Designed by Boston Dynamics, Spot was featured in a Sam Adams beer commercial Sunday night, but SPPD Chief Anthony Holloway says the robot will do much more than dance on his team.

"Spot will be used where, instead of us having to send officers up to a scene, Spot can go up and open a door, or it can go inside and take a look around and see what danger is there," Chief Holloway said. 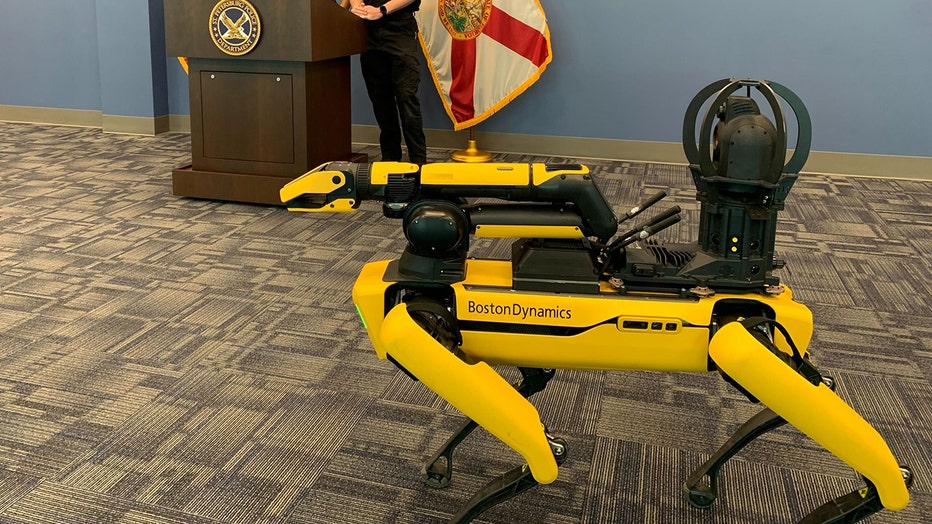 SPPD's robot is a little more high-tech than what was featured in Sunday night's advertisement. Holloway says the police version is outfitted with an intercom system and cameras.

"So he can talk to, talk back and forth with the officers, and also again the officers can see what dangers are inside," Holloway said.

It can run up to four miles an hour, operated by what looks like an X-Box controller.

Spot costs about $226,000, but every penny of the funding was donated by local residents Brett and Lisa Speer Vickers.

"This robotic dog will deescalate and also take stress levels down both for the officers and potential perpetrators," Brett Vickers said.

Vickers, who started his career working for Dell and Apple Computers designing data centers, said after seeing Spot, it was a no-brainer.

"I’m a firm believer in having the best tools available," he said. "It’s much like the robotic vacuums you have at home, this is just another tool for these guys to use, and it’s going to save lives. I’d much rather have this destroyed in a high-stress situation than a human being."

The robot will be on hand for St. Pete Fire Rescue and any law enforcement agency in the area that needs it, Chief Holloway said.

Right now, there are only two other law enforcement agencies in the US – in Hawaii and Massachusetts – that have a Spot robot on their teams.