Starbucks plans to raise its menu prices this year to offset inflation as well as labor issues due to the ongoing COVID-19 pandemic, according to multiple reports.

Despite strong holiday sales, the coffee franchise lowered its earnings outlook for the 2022 fiscal year, which ends in September. The company said it expects earnings per share to decline by 4% to 6% for the year, a wider range than the 4% decline it previously forecast. It expects adjusted earnings growth of 8% to 10%, down from its previous forecast of at least 10%.

"Although demand was strong, this pandemic has not been linear, and the macro environment remains dynamic as we experienced higher-than-expected inflationary pressures, increased costs due to Omicron and a tight labor market. We remain focused on actions that drive both top and bottom line growth, including industry-leading investments to attract, train and retain the best talent for our stores as customer occasions increase," said Kevin Johnson, president and CEO of Starbucks, in a Tuesday news release.

Johnson noted three driving factors for the hike in menu prices which included inflation, COVID-related pay for employees, and the cost of hiring and training new workers in a tight labor market, according to MarketWatch.

The Seattle-based coffee chain also plans to raise prices more than once in 2022, Johnson confirmed during a conference call. 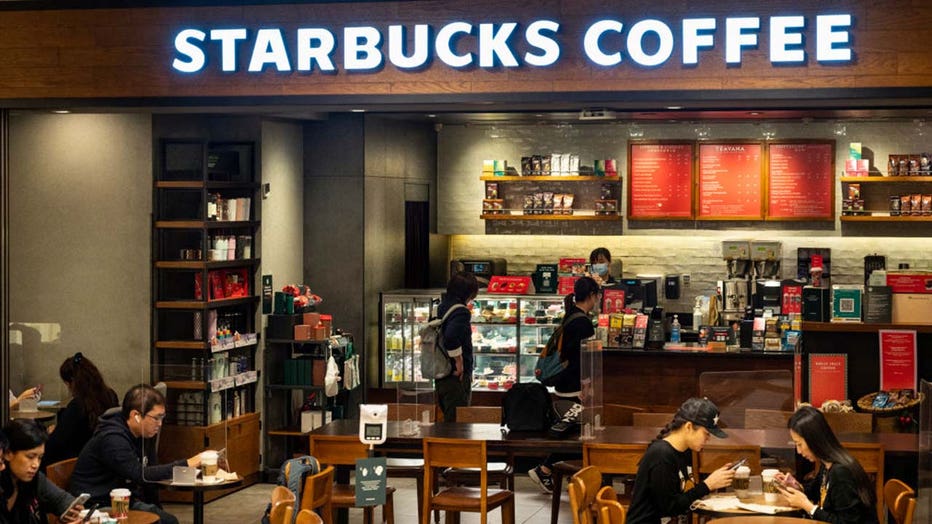 FILE - Customers are seen at a Starbucks Coffee store.

"We have already taken pricing actions this fiscal year, one in October 2021 and another in January 2022. And we have additional pricing actions planned through the balance of this year, which play an important role to mitigate cost pressures, including inflation, as we position our business for the future," Johnson said Tuesday during a conference call with investors. "There are many factors that contribute to our thoughtful pricing strategy, including the increasing US inflation rate currently running at 7% or perhaps greater, as well as wages, customer demand and other costs."

Starbucks also said it is cutting back on marketing and promotions to help offset its rising costs.

U.S. same-store sales, or sales at stores open at least a year, were up 18% over the October-December period a year ago. The Seattle-based coffee giant said more U.S. customers were visiting at all times of the day and spending more per visit, especially on breakfast and baked goods.

Starbucks raised prices twice — in October and December — to account for higher commodity, transportation and labor costs, but it didn’t dampen U.S. customer enthusiasm. More price increases are planned for this year, the company said.

"There is a pent-up demand for Starbucks and for people wanting and longing to return to their normal routines," Johnson said.

The omicron variant did start to cut into U.S. sales — and limit store hours as more employees called in sick — toward the end of the fiscal first quarter, the company said. Omicron-related staffing shortages at Starbucks’ suppliers forced the company to spend more on alternative shipment methods.

COVID also had a significant impact in China, where same-store sales in China fell 14%. Starbucks said 75% of stores in China were closed or had limited hours at the end of December.

Starbucks’ revenue rose 19% to $8.1 billion in its fiscal first quarter. That was ahead of Wall Street’s forecast for revenue of $7.89 billion, according to analysts polled by FactSet. Overall same-store sales growth of 13% was in line with expectations.
But Starbucks fell short of earnings forecasts, and said inflation, continuing pandemic-related costs and rising labor costs were a contributor.

Johnson said Starbucks hired more workers than anticipated during the quarter, which led to higher training costs. Johnson said attracting and retaining workers continues to be a challenge for Starbucks as well as other retailers.

In October, the company said it was raising workers’ pay to help ensure a steady workforce. Johnson said Tuesday that $1 billion investment is going forward, and is critical to Starbucks’ success. The company said all of its U.S. workers will earn at least $15 — and up to $23 — per hour by this summer. Workers can also get a $200 recruitment bonus to help attract new employees.

But the announcement didn’t pacify some workers, who are calling for more say in the way the company’s stores are run. Two Starbucks stores in Buffalo, New York, recently became the first Starbucks stores to unionize in decades, setting off a wave of union activity at other stores across the country. As of this week, 54 stores in 19 states have filed for union elections, according to Workers United, the union organizing the effort.

The company reported adjusted earnings of 72 cents per share, lower than the 80 cents analysts were forecasting.
Starbucks shares were down 1% in after-hours trading.