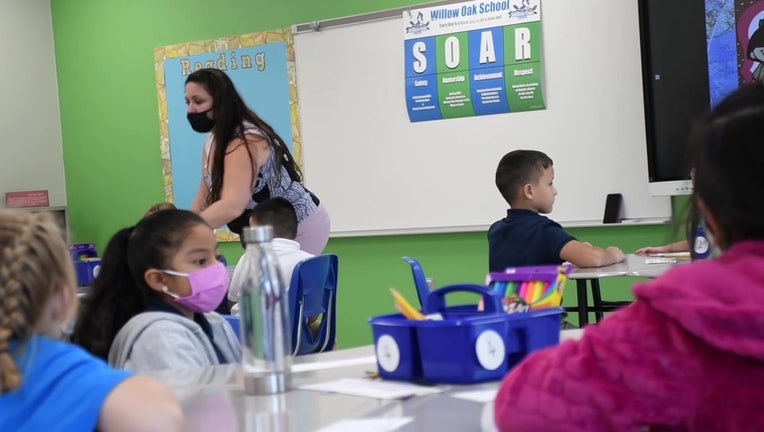 TALLAHASSEE, Fla. - Top Florida education officials on Tuesday inched closer to a legal battle with the Biden administration over federal reimbursements for school districts that were dinged financially by the state for imposing student mask mandates during the COVID-19 pandemic.

Florida Education Commissioner Richard Corcoran received authorization from the State Board of Education to sue the U.S. Department of Education for intervening in the state’s punishment of school districts. Tuesday’s decision by the state board was the latest development in a feud with the federal government that has been brewing since the beginning of the school year.

On Aug. 17, the State Board of Education voted to withhold money from the school districts in Alachua and Broward counties for maintaining student mask requirements despite a Florida Department of Health emergency rule that sought to prevent such mandates. The penalties were designed to block funding in amounts equal to the monthly salaries of school board members.

The U.S. Department of Education, however, began to offset the state’s penalties by launching a grant program dubbed Project SAFE, or Project to Support America’s Families and Educators. As of this week, nearly $721,000 in federal funding has been awarded to the Alachua and Broward school districts.

"These are, to date, the only two school districts in the nation that have received SAFE grants," said Anastasios Kamoutsas, general counsel for the Florida Department of Education.

On Oct. 7, the state education board authorized financial penalties against six other school districts and approved a plan to try to thwart the Biden administration’s grant funding. That plan involved withholding additional amounts of money from districts equal to the federal funding.

The move prompted the federal education department to file a cease-and-desist complaint in its Division of Administrative Law Judges.

"We believe Florida’s actions have violated federal law by reducing state funds based on the receipt by districts of federal funds," the federal department said in a statement accompanying its Oct. 28 complaint.

But Corcoran asked the state board Tuesday for a green light to "vigorously defend (against) the cease and desist complaint filed by the U.S. DOE" and to "protect our sovereignty" against what he called an "unlawful" federal grant program.

"The aim of this board’s enforcement is simply to encourage school districts to comply with the law, a value we all want our children to hold," Corcoran told the board. "Now, as you’re aware, during the enforcement process, the Biden administration made its best efforts to both politicize these issues and undermine the legal authority of this board, and indeed the sovereignty of the state of Florida."

The time has finally arrived for parents who want to get their kids, ages 5 and older, vaccinated against the novel coronavirus.

RELATED: 'We have been waiting': Parents happy to finally get kids vaccinated against COVID-19

The state education department has hired attorney Steven Engel to represent it in the U.S. Department of Education complaint, "and, if necessary, in related litigation," Kamoutsas said Tuesday.

In defending the state board’s actions, Corcoran touted a Nov. 5 decision by a state administrative law judge that upheld the Department of Health’s emergency rule, which said parents can opt students out of school mask requirements. Administrative Law Judge Brian Newman wrote in his decision that attorneys for six school boards challenging the rule "failed to prove that the emergency rule opt-out provisions facilitate the spread of COVID-19 in schools."

With all school districts now in compliance with the health department’s rule, attorneys for the state education department said it intends to release money previously withheld from districts for failing to comply with the board’s mask directive.

Engel told the board that the districts’ reversal on the mask mandates could upend the U.S. Department of Education complaint before a federal administrative law judge.

"Currently, the (administrative law judge) has set a hearing for Dec. 10. But in light of the Alachua school district’s recent compliance, and the Broward school district’s anticipated compliance, the previously withheld aid … is expected to be dispersed. And therefore, the parties requested that the administrative law judge defer issuing a briefing schedule. And we expect that the hearing date will be pushed back if that case goes forward at all," Engel said.

Shortly before the state board adjourned Tuesday, Corcoran issued a warning to districts that might consider reimposing mask mandates.

"It’s my hope that districts will continue to comply with Florida’s laws, including the Department of Health’s emergency rule. But should that change, we must vigorously defend the state’s authority to control its educational system," Corcoran said.

A spokesman for the U.S. Department of Education didn’t immediately respond Tuesday to questions from The News Service of Florida about the status of the department’s cease-and-desist complaint.