TAMPA, Fla. - As the pace of growth in downtown Tampa picks up, city planners are making sure drivers slow down.

On Wednesday, Tampa's mobility department made a major change to the intersection of Zack and Franklin Streets. The stoplight was flipped to red flashing lights and new stop signs went in to create a four-way stop.

"The signal was put in about 40 years ago and it is reaching the end of its structural service life, so we decided that we wanted to take a look and see what the right solution was to put in its place," explained Tampa smart mobility manager Brandon Campbell.

While studying the intersection, city planners found what was once a busy intersection for drivers had transformed into a hub for foot traffic.

"What we found is that there’s actually more people walking, biking, and scooting on Franklin than driving," said Karen Kress, the director of transportation and planning at the Tampa Downtown Partnership. "I think it’s pretty clear who can have the priority under that scenario."

Franklin Street has been a main thoroughfare in Tampa dating back to the city's start in the 1800's. It was both the first paved street in the city and the first street to receive streetlights. The street has also reflected Tampa's mobility preferences through the years: from streetcar lines, to the rise of the automobile, and now to Tampa's urban renaissance. 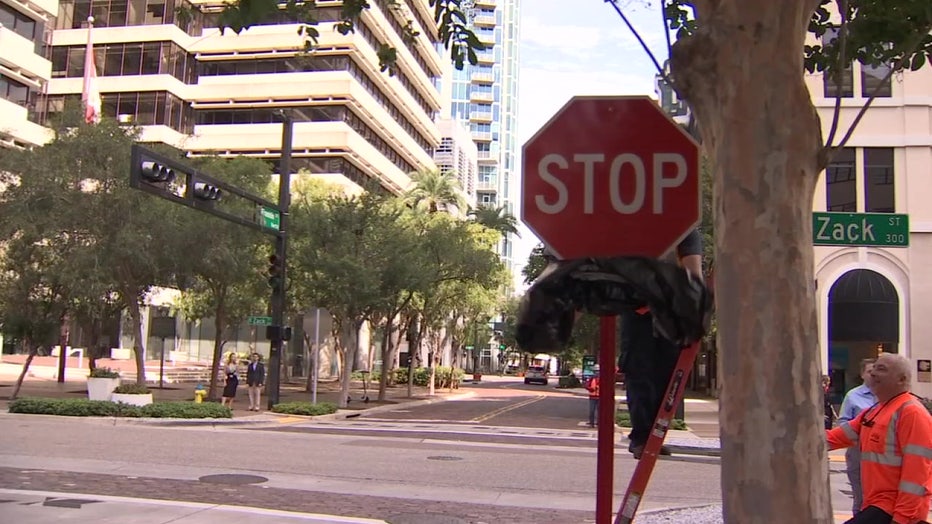 More people now live, work and play in downtown Tampa than ever before, and Franklin Street, with its single lanes in each direction, charming brick surface and tree-lined sidewalks, has become a favored route for pedestrians. For mobility experts, switching from a traffic signal to a four-way stop at the intersection adjacent to the Tampa Theatre and several popular restaurants just made sense.

The new four-way stop will also ensure cars slow down and look out for pedestrians.

"I don’t think the stoplights are as helpful as people might think, because I often see people trying to beat the light, and I think that creates a lot of hazards, especially in an area that is so frequented by people walking," said Ray Wong, an engineer whose office is not far from the newly remodeled intersection. "There are always people going out to lunch or dinner or after work around here."

Tampa has installed more than 100 four-way stops this year, but this is the only signaled intersection to be converted into one. It might not be alone for much longer.

"The Downtown Partnership hopes that this might be one of several along Franklin Street and become a trend," said Kress.